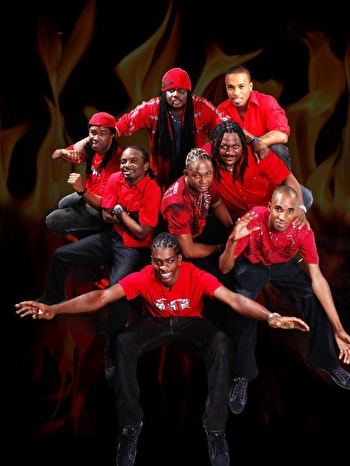 For the past fifteen years, krosfyah has been touring the world inducing fans across three continents into a soca frenzy! Yet despite the group's sophomore CD's (Ultimate Party - Pump Me Up) sales (totaling over 300,000 units to date without the assistance of a major label), the guys remain humble. As Edwin Yearwood, principal songwriter for krosfyah indicates, "We are just a bunch of island guys who love to play music." And play music is exactly what they do. Whether entertaining 20 or 20,000, krosfyah always delivers an energized performance!

The evolution of krosfyah from playing covers for tourists on the Barbados hotel circuit to touring the world and performing their original music for dignitaries like Nelson Mandela occurred over a span of seven years. While few critics ever doubted the potential of krosfyah, most never imagined this level of success, in such a short space of time.

In 1994, krosfyah released their debut album, Ultimate Party, which propelled the group from obscurity to the most popular soca band on the island of Barbados and won them the coveted "Band of the Year" title.

In 1995, the group released Ultimate Party-Pump Me Up. Not only did this album produce the hit song, "Pump Me Up", which became the national anthem for the youth of Barbados but it travelled across the seas to Canada where it achieved the coveted Gold status in January of 1997. As you read, it continues to receive excellent sales and reviews throughout the Caribbean, South America, the USA and Europe, while still finding its way into new global markets. The album bestowed unprecedented honors upon its lead vocalist Edwin Yearwood: "Party Monarch", "Road Monarch Champion" and "Calypso King" in 1995. The triple-crown win by one artiste would mark the first and only time to date, in the history of Barbados'''' Annual Crop Over Festival, that such a feat has ever been accomplished.
In 1996, the success of krosfyah's third album, Aim High, led to more awards. The album also produced the hit song, "Wet Me", which dominated the music chart in the neighboring island of Trinidad and Tobago. 1997 brought forth a six track cd, entitled Fyah Riddims, 3 tunes from that Album had a good run, those being Road Block, Highway Robbery & Redemption of Me. Christmas of that year was a 6 track album entitled Fyahside Christmas, with favourites such as My Sweet Lord, No Christmas Without You, Jah Son, End of the Rope and Celebration.

During 1998, krosfyah surfaced from the studio with a new album, Hot Zone and a new co-lead vocalist, Ray Armstrong. Hot Zone, like all of its predecessors, produced hit songs such as Oil Pumping, Calor & Appetite which enabled the band to tour across the United States and Europe performing at music showcases and festivals.
As if not to be stopped, krosfyah released yet another album krosfyah.com in 1999 with hits like Agony (which saw Edwin Yearwood crowned 1999 Party Monarch for the third time), Ragga Beenie, Forkin', Be-sa-me and Sexy Body, to name a few.

The year 2000 turned out to be no different. Krosfyah marked their return to their homeland's cultural festival, Crop Over, with another remarkable feat. Lead singer with the band, Edwin Yearwood, won his fourth Party Monarch title with the track, "Fiah Fiah," which is featured on his debut solo album Influenced: The Good and Badd In Me. This album was released alongside krosfyah's own The Best of krosfyah. This compilation of hits from the past and including two new tracks, continues to demonstrate krosfyah's musical ingenuity.

The return to Crop Over for krosfyah has indeed proven to be one of their best decisions ever. Following the trend of the past years, krosfyah released yet another pulsating, award winning album. "Kool Under Fire," the name of the album, is a fitting title for this ever-dynamic band. The success of this album includes the Barbados 2001 Road March tune, "Sak Pasé", which was sung by Edwin and the effervescent Khiomal Nurse, who also joined the band that same year. "Emancipation" (another skilfully penned and appropriately titled masterpiece which reflects on our freedom, and some spanish flavour in "Plenty Amor". These songs will certainly add to the continuation of the group''''s success.

One would agree that in everything there will be good and there will be bad. However, the success comes when you realize amidst it all you can have the situation "Lock Down". krosfyah's 2002 album is certainly a testimony of will power to rise to the top. The album features the Barbados Tune of the Crop third place song "Road Jam", along with fast pace hits, the likes of "Fire Man" and "Ride It" and cool titles "Satisfaction" and "Ling Tong". Lead guitarist Anthony Bailey, debuted his solo album, "Unheard Message," that same year, a 20 track cd that's a must hear.

Krosfyah's versatility continues to be evident even in their album titles. "Enchanted", simple but thought-provoking is the title of the 2003 album. The flava is cool, refreshing and totally krosfyah (still down-to-earth and for their fans and supporters). One song "Family" was specifically written for their faithful supporters, especially those who frequent the message board on krosfyah's website. Other songs include "French Kiss" featuring a French flavoured melody and a ragga-soca number called "Sorry."

"Zero Tolerance", the 2004 album title, clearly speaks out against music piracy, drugs and violence. This was definitely the stance which the band and Edwin Yearwood took to the Party Monarch Finals, where he won for the 5th time with "Invasion." With other hits such as "Strong Back" and "Pressure" by Khiomal, Keep Rolling It" and the sweet melody of "Sugarcane", which placed 2nd in the People's Monarch Final, this album is yet another classic example of pure musicianship.
For their 15th Anniversary, December 31st, 2004, the band brought out yet another classic masterpiece, "The Best of Krosfyah Vol. 2", and to add the icing to the cake, lead vocalist and songwriter, Edwin Yearwood, was signed to VP Records - Waistline Music Division, being the first Soca act to be signed to this label. With the increased presence of Soca in the International marketplace and the genre entered into the Grammy Awards from 2006, the best is yet to come from this music maestro and his band.

In 2005, Krosfyah brought their album, "Timeless," which includes popular songs such as Head Gone, Don't Move, First Lady, and Friends, which features popular Bajan artiste, Lil Rick. Tony Bailey won an award at the first annual Barbados Music Awards for the band with his ragga soca song, "Sweetest Thing," held in the beginning of 2006. The band also copped the best soca band and best soca album awards at the 13th Annual Reggae Soca Music Awards held in Ft. Lauderdale, FL. Lead singer, Edwin Yearwood, also won an award for his collaboration with Bunji Garlin in his classic song, "All Aboard."
Fast forward to the 2006 Cropover season, Edwin Yearwood and Khiomal Nurse, noth participated in the Party Monarch Finals, placing 2nd and 4th respectively. The band's album, Everblazin, has been called the best soca album of the summer by many. It's no wonder, with big songs such as, "We Ready To Go," "Welcome To The Band," "Sinking Sand," and "Agua," all of which have been on the top of Barbados' radio charts as well as heavy rotation in the various soca events since.
While it is true that krosfyah is "just a bunch of islanders who love to play music", krosfyah's players (Edwin Yearwood, Anthony Bailey, Khiomal Nurse, Morris Cassell, Corey Jordan, Neil Burnett, Mario Burnett, Felix Forde, Michael Agard, Andrew Weekes, Ronald Taylor & Aynsley Greaves) each add a unique ingredient to their magical music.