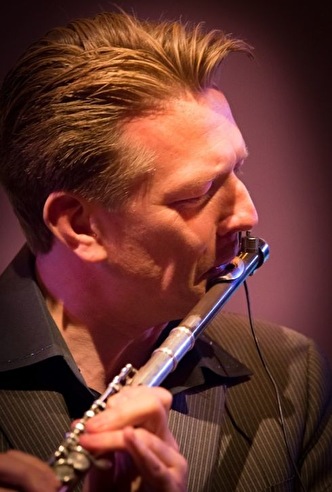 After nishing his studies at the Amsterdam Conservatorium with the highest accolades possible, Litz took to professional performance on stages from Amsterdam to Jakarta, and from Warsaw to Rome. Frequently labeled 'the sambajazzfunkutist', he is uent in a wide range of musical styles and genres. "The ute is all about breath and air," he says. "It has a wider range of timbre than the sax. Its sound is closest to the human voice."

Litz's ute has 'growled' in many musical settings, from orchestrated jazz to house. He rst heard the 'growl' while listening to Ian Anderson, singer and utist of Jethro Tull. Now he includes Tulls Bach-meets-jazz rendition of Bourée in the curriculum when tutoring young musicians. Next to learning utists how to improvise and play 'funky', he's teaching theory to producers and deejays.
"At their request, I function as a kind of music theory coach to a number of producers and DJs," Litz says. "That came out of co-operating with producers and deejays at live performances. They want to expand their knowledge of music. I applaud that ambition and gladly put in a helping hand. It's a way to return the compliment and help add an extra dimension of musicality to their tracks."

Who's Who of jazz and dance crossover
As a youngster, Han Litz was taken by the ute. He started playing cross ute at the age twelve. Four years later, he got hooked on jazz via radio. "It was the sound," he comments. "I was listening to Top 40 radio and did not have a clue that there was so much more to music than the hits of the day. Radio is still critical in broadening the musical horizons of musicians as well as the audience."
Even before he graduated from the Amsterdam Conservatorium in 1998, Litz had his rst taste of the recording studio and European stages. Fifteen years on, he has gathered many laurels, built an extensive (and impressive) discography, and his resume reads like a Who's Who of the international jazz and dance crossover scene.

Together with KC The Funkaholic, Litz started the spiritual jazz project Kindred Spirits Ensemble. He is one of the driving forces behind Lex Empress & The Royals. He and Cassie 6 have collaborated closely in the studio, remixing Osunlade among others. Han is also a well-respected live performer and interpreter, having been selected in 2011 to perform on ute and piccolo in a ground-breaking debut live performance of Arthur Verocai's seminal self-titled 1972 album for the Brasil Festival Amsterdam, conducted by the great Verocai himself.

Thinking in sound
Han is the musical director of the Han Litz Group, and composed arranged and produced their recently released debut album, Epiphany (2012 NL). Tracks from Epiphany have been remixed by the likes of Hardsoul, Monte La Rue, Kid Sublime, Nelson & Djosa, Diephuis and Phil Martin for a soon to be released remix album.

"I think in sound," Litz comments on his many roles and wide range of musical activities. He likes to think of it as building bridges. "I cover a pretty wide scope. As a ute-player, I enjoy crossing over jazz and club music. The ute provides the ideal bridge between genres, and my deep experience of composing, arranging my own and others' music allows me to add an extra dimension to any club performance."