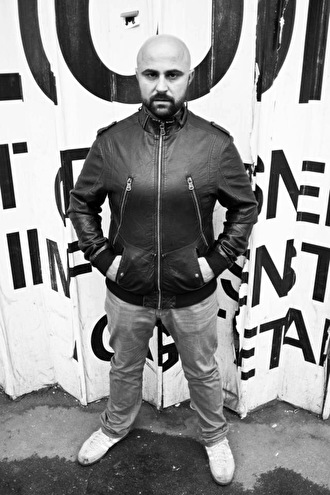 After finishing successfully his studies at SAE London,he starts his own record labels, Funktastique records and Bailado Music, and enjoys a string of releases, favoured by dj's like Sasha,James Zabiela, Seb Fontaine, Steve Lawler, John Digweed and radio stations including BBC Radio 1 and Kiss fm.
Around the same time, he begins his residency at the world famous Cavo Paradiso club in Mykonos, Greece (where he is the resident dj since 2000), and gets regular appearances at the Ministry of Sound,Turnmills,Egg & Soulsonic clubs in London.

Stathis has enjoyed performing dj sets alongside many of the worlds influential Djs, such as Carl Cox, Danny Tenaglia, John Digweed, Laurent Garnier, Little Louie Vega, Felix Da Housecat, Pete Tong, Steve Lawler,Sven Vath,Ricardo Villalobos,Matthias Tamzmann,Loco Dice,Marco Carola,Raresh,to name a few of the highlights in his performing career. His sympathy for the audience and his 'music has no borders' attitude made him abuse many stages on the global stage,from Canada to India and from Cyprus to the UK.

In 2007,he comes together with Kiri & Kostas Poulos and forms Rhythmatic,the infamous London party that has been going on from strength to strength ever since,establishing itself as one of the premier underground warehouse parties in town.Being the driving musical force in the form of the resident dj,Stathis has developed and sculpted his own sound and enjoyed playing next to dj's such as Onur Ozer,Rhadoo,Petre Inspiresku,Thomas Melchior,Premiesku,San Proper,Fumiya Tanaka,Maayan Nidam amongst many others.

2013 sees him spring up again on the production front,after a considerable amount of time away,were he devoted most of his time on playing a pivotal role to the success of the Rhythmatic and Cavo Paradiso brands on the international stage.

He is currently collaborating with London based Greek dj and producer Alex Celler and together they have released on Dutch label Soweso as Steller (Terrence EP-2010), and Archie Hamilton,a fellow Rhythmatic resident and label boss of Moscow records.
Some of his affiliated labels for 2013 are Memoria Recordings,Body Parts Records,Karton Music Group,Moscow and Sexonwax,with a release schedule that will see him explode into the quality underground world circuit.His first solo release since 2006 will be out in spring 2013,by the Dutch label Memoria Recordings,a much anticipated solo return which will definitely be worth the wait.

Stathis's career in the music industry have seen him play many different roles,from dj and producer to artist booker,promoter and record label owner.Having an all around knowledge on how the industry works pushed Stathis into a new adventure,in the form of a writer and one can find his articles at London based website Meoko and the world renowned Ibiza Voice.

This is an extract from a piece he wrote recently and reflects Stathis's artistic integrity and his love and passion for the Dance Music movement.

What Dance Music has given to the world is the ability to live an experience that has been embedded in our DNA for thousands of years . One of the reasons it became so successful is because society made us feel disconnected to one another so Dance Music gave us a subconscious need to reconnect . Self absorption and self obsession are unnatural aspects of our psyche and materialised out of a society that imprisons the human spirit and quality underground clubs helped to rid such attitudes that have no real value and place in our lives . I am a strong believer that in today's society, these kind of shelters and places of creativity and free thinking are as important as schools and hospitals and we have evolved for millennia to arrive at this point in time.