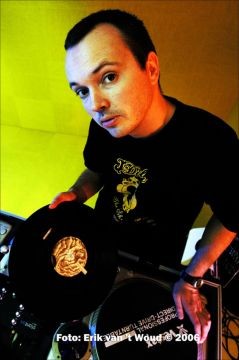 In '94 he performed scratches on the compilation CD 'De Posse Nederhop Groeit"; released by Dutch rap legends Osdorp Posse and he can also be heard on CD's by trip-hop group Artefact and sound artist X-o-X. In '98 he was back on the radio and could be heard on nationally broadcasted show Bassline Radio. He also was a guest DJ on many other shows. FunX, Kink FM to name a few, were some of the stations he played at, as well as hosting and mixing at his own shows on local radio in the Amsterdam area.
Besides these activities Broky B released various mixtapes (i.e. Bite This) and competed several times in the DJ-Battle Turntablized, where he met fellow-DJ's and formed the Wax Wankerz: Holland's first turntablist crew. They performed with the Netherlands Radio Philharmonic Orchestra, at the hip-hop event Back to the Planet Rock, the National Phonographic Festival and competed in DMC and ITF team-battles. The WW also released the battle record Masturbation Tool.

From 2000 to 2004 Broky toured Holland and abroad (US, Canada) with theatre/dance group ISH. With them he created several productions, performed in most known theatres in Holland (i.e. Royal Theatre Carré), made national TV appearances (Sportgala 2002, NPS Muziek & Dans 2003) and made a show with Toneelgroep Amsterdam.
His involvement in ISH gained him more popularity outside the hip-hop scene and resulted in performances with Jongerentheater 020, het Brabants Orkest and a residency at club Panama in Amsterdam. After his adventure with ISH, Broky started performing with Scat the Breakdance: a crossover act with electric-violin, break-dance and DJ. The shows were met with great enthusiasm at schools all over the Netherlands. He was also involved in Amsterdam hip-hop school Solid Ground Movement. He taught workshops, selected music for shows and helped put the school on the map.

After performing at theatres for some years Broky decided to return to the club scene. From 2004 to 2007 he was one of the residents at parties like Crossfader, Ontfront and at the Elbow Room in London

. More gigs abroad followed, in Surinam he was one of the DJ's at the Battle of the Year Caricom, he DJ-ed in Alanya (Turkey). He was a guest DJ at Funk-Off in London, a residency, which took off in 2005, and is still running is the break/hip-hop dance party Multiple Jam.
Since 2000 Broky also noticed the growing interest of the corporate world in hip-hop/urban culture. This resulted in shows for i.e. Adidas, Red Bull, SNS Bank, Johnny Walker and Maxi-Cosi baby products.

All these activities have helped to develop Broky into a versatile DJ, who alongside DJ-ing at parties and on the radio, is a talented scratch-DJ who enjoys and likes educating others about the art of DJ-ing. At the moment he is touring with percussion group 4-Beat, metal band Plutonium and is still performing with Scat the Breakdance. Besides this he is in a crew with DJ's DNS & Setiono; The Turntable Rockstars, who in their short existence, have already opened up for house DJ Laidback Luke on one of his tours.