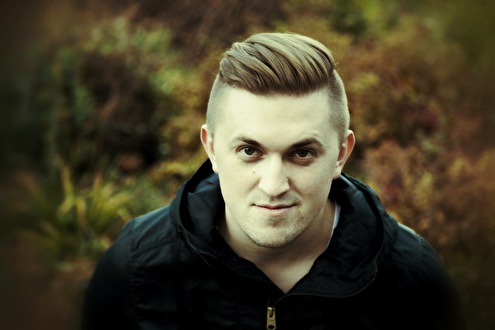 It does not matter which city, which time zone, who are the people around him and what language they speak, what time of a day, has Vitalii slept before or has been awake waiting for his flight, he will come to the DJ place and perform his set as if it is the best party of his life. Exactly for this quality, for this shine in his eyes and for this true energy lovers of club music are waiting for his performances. Perhaps that is why Vitalii has one of the most busy tour schedules of all DJs of the CIS. And certainly this is the reason for full dance floors on his parties.

Back in 2007 the unknown Spartaque first gained access to the big stage, performing at the first major festival in Ukraine - Global Gathering. Having conquered the audience with his energy, he became a resident of this event, every year delighting people with his explosive sets. And this festival was not the only one for him - people at such iconic events like Love Parade, Kazantip, MayDay, and many other big events on both sides of the Atlantic could see personally that Spartaque knows his onions, as he leaves a piece of himself on the dance floor every time!

But don't forget that the real success has many components, and it is influenced by many factors. It's not a secret that one of the most important elements of an artist's popularity, and in particular a DJ, is his regular podcasts and radio shows. Spartaque succeeded in this - Supreme radio show first appeared on the radio station in 2007 on the waves of Kiss FM, at that time a cult radio station not only in Ukraine but also in the CIS. It has become a guide to the world of Minimal Techno for true dance music lovers in the post-Soviet territory. Years were passing, popularity was increasing - in 2009-2010 Supreme became the best mix show in Ukraine according to TOPDJ.UA. Since 2011, this nomination has been removed from the list, but it does not prevent the podcast in gaining its popularity. Supreme by Spartaque has been holding his position as the most demanded radio show about the techno culture in the CIS for the past 5 years according to the results of a prestigious interactive rating PromoDJ.ru. Its army of fans is growing around the world and since 2012 it has got into the distribution network Syndicast UK - the world's leading provider of techno podcasts from Britain, whose clients are such icons of the genre, as Carl Cox, Umek, Marco Bailey and many other prominent DJs. Also in 2012 mix show changed Ukrainian production on the British, and jingles for podcast since then has been recorded by some of the best English-speaking voices of our time.

Currently Supreme is a real machine, locomotive, carrying the unrestrainable energy to techno fans from all corners of our planet. More than 50 radio stations from around the world are rotating Spartaque's shows on their waves. Performed podcast has about 10,000 listeners using various resources in the first day after downloading to the network. But most important is the fact that, regardless of how the trends are changing, each Supreme from the first to the most recent episode has always its traditional feature - the uncompromising selection of the tracks for the show. Perhaps the principle that each episode should contain the freshest and most qualitative material has become a key moment in the rapid popularization of the podcast and continues to lead it and its creator to conquer new heights.

An important point in the development of any DJ is the fact of composing music. We have passed the time when these two professions were separate, and now an electronic musician without DJing and a DJ without his own tracks and remixes simply can't exist. Many DJs, realizing this fact, grabbed their sequencers in panic. Spartaque's situation was exactly the opposite. "When I was 15-17 years old, I just wanted to compose music and be an electronic musician, occasionally performing at venues. And only when I was 18 I realized that I can feed myself working in this area, if I start DJing. That is how a career of DJ Spartaque has begun", - says Vitalii in one of his interviews.

Indeed, being completely unknown, but very ambitious young artist, writing his own tracks brought a lot more fun than walking with friends and flirting with peers. Friends, sometimes, even against their will were compulsory critics and listeners of extremely many-sided Vitalii's art, who was scattering them the cassettes with another new track, written earlier in the morning. Nevertheless the dream of becoming popular seemed distant, until one cold November day in far 2005, Vitalii had received a call from the CEO of the largest company in the Ukrainian club culture Virus Music, Dmitry Feliksov. It was a proposal to release the track "PassWord" on the disk TOPHIT TOPDJ, as well as a recommendation to come to Kiev from Kharkov in order to shape the track up in a regular studio office. It is not necessary to explain how much remarkable event was the very first trip to Kiev for a 19-years old Spartaque. Very difficult to express in word those emotions experienced by the musician, holding the official CD with his work released for the first time.

Over the years much has changed: now Spartaque has more than 300 releases on 80 labels, remixes for the world's top artists, including the legendary Moby, 3 own labels behind and the preparation of the new one. It is not so much free time to catch a muse, as much more time is needed to spend on management than on creativity, hereby the board of aircraft has become the main place of writing tracks. But the most important is remained, and this is the sincere belief that the DJ is, first and foremost, a musician.

Touching upon the labels, it should be noted that in 2008 thanks to DJ Bruno and Spartaque, Ukraine saw the first independent imprint Perfect Groove Foundation. At that time it became the real breakthrough and the stronghold for slightly inexperienced performers of Ukrainian dance scene. The experience gained while working with this experiment, which lasted for a year, became invaluable for Spartaque. After a couple of years together with Egor Boss an exceptional idea to create a new label had arisen, and the decision to tie it up to the festival "I AM TECHNO" was collectively made. At the same time one of the most recognizable logos had been created, which became the symbol of Techno music for many on the territory of the former Soviet Union, and far beyond its borders. After successful festivals, series of parties in the popular Kiev club Forsage had been organized, that consequently became a cult franchise. At the moment, active preparations to launch another label together with indefatigable Ukrainian sound producer Konstantin Yoodza are conducted, which aims to actively promote commercial techno sound involving a wider audience in this culture.

During his active work Spartaque was many times awarded and nominated for various prizes rated TOPDJ.UA:

Situation repeats in 2012: Spartaque again reaches the highest grade in the ranking TOPDJ.UA. For four years in a raw holding the first place in the ranking TOPDJ, in 2013 Vitalii yields it to a worthy opponent - Omnia, taking second place in the nomination "DJ". But he confidently maintains his leadership position in the interactive rating PromoDJ.Com, entering the top five leaders of CIS countries for the past 5 years.
During Spartaque's career his name has been overgrown with interesting stories and legends, retelling which would have taken several chapters or even an entire book. However the essence remains the same - it's hard to imagine the club culture of CIS countries and the world techno without this performer.

So ambitiously started his way with a performance in front of 30 thousandth audience in the central square of his native town Kharkiv in 2005, Spartaque goes forward, following his main principles - to increase the speed constantly, not to be afraid of daring ideas, to set unachievable goals and to reach them without noticing the obstacles. And of course be incredibly grateful to those who appreciate his creative work and support his undertakings, as without this support nothing would exist.