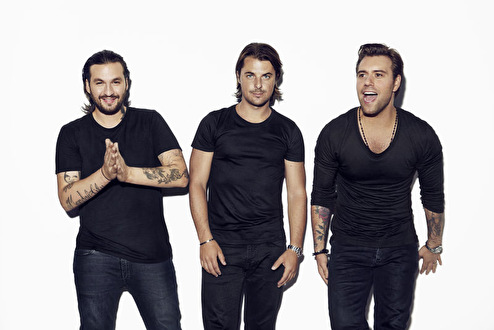 "The whole season has been absolutely unbelievable," say house Mafioso Steve Angello, who's never backwards in coming forwards with sound bites. "We're competing with the biggest nights on the island and now we're one of the biggest – I've never seen Pacha like that before. This year everybody came through and it's been an incredible experience."
As for the party, we can't help but notice that this Motel is full of the same raw energy you'd normally see at a rock show – only for these clubbers, 'One' really is the new 'Teen Spirit'. "We did the track in LA together," explains Sebastian Ingrosso. "We actually thought we wouldn't do a track together but after 'Leave The World Behind' with Laidback Luke did so well, we decided to make a track and it came out great." Amazingly, the whole shape of 'One' came together in just two days. Not bad for a record that Beatport has proclaimed the fastest-selling number one download single of all time. "Two days!" laughs Seb. "We had the idea and arrangement done and after that we were bouncing it back and forth for one day. The concept was simple: we had an idea of looping a kick-drum into a bassline but I said it needed a crescendo of in your face melodies." But let's rewind a little. We all know that 'One' is the record that's flipped the script but there are so many other questions we need to be answered.

For example, how did these Swedes meet? Who gave them their name? And are they really direct descendants of the mafia? "Me and Seb met when we were six or seven: we got into all kinds of trouble together!" laughs Steve. "Seb's Dad had a label called Plumphouse and we got into music and did all kinds of weird things including lounge compilations and made music for shows. I even did music for a Eurovision Song Contest in Sweden…" So Team Angello and Ingrosso had been working together for quite some time. "We bumped into Axwell ten years ago now, when he was doing stuff on [the house label] Sulphuric," says Steve. "We got in touch – we were younger than him – and we just clicked. We all learned from each other because we were young kids. Also, when it came to the music, Me and Seb were more rough. I don't tweak a hi-hat for six hours!" And then there was fellow Swede Eric Prydz, who together with Steve created the CR2 smash 'Woz Not Woz in 2004. "We all hung out like friends and started building a relationship. But no-one would give us shows – we had to beg nightclubs to put us on! We begged them to let us play for one hour and everyone loved it. But since no one would touch us, that's why we worked so hard at the start. After that, me and Ax did Supermode (the Communards-sampling 'Tell Me Why' on Data) and me and Seb did a couple of records as Buy Now. We never got the support – until now."
The dynamic of the three and their collective history is the key to the Mafia's continued success. "It's been one hell of a ride," nods Steve. "When the name 'Swedish House Mafia' first popped up, it wasn't something we focused on straight away. People called us that on forums back in the day. But we've been through everything together. I can always lean on one of their shoulders and they can lean on mine. I can always trust their opinions. when I have a track, they tell me straight away what they think. With Swedish House Mafia, you're with friends…."

Everybody knows that Axwell, Steve and Sebastian are separate entities: they all have their own record labels (Axtone, SIZE and Refune respectively) and they all have separate lives and individual concerns. But as the success of their recent sell-out Brixton Academy shows and the growing success of Masquerade Motel will testify, it's what they achieve collectively and as a unit that makes for the most magic. Axwell has already been giving this subject some thought. "Swedish House Mafia is a monster of its own. We've tried to control it and seen it as a bonus but the truth is, it just won't go away. I call it 'IT'! When we work together, shit happens. It's a machine that has a certain electricity that's much stronger than anyone else. Let's see where it takes us." Last summer, the Swedes weren't together as often as they'd hoped but the demand and collective success has dictated that the Mafia must now meet almost every single week. "This Summer 'IT' will be more often than last Summer because we are having such an amazing time. Last year we all lived in Ibiza and we got to hang out quite a bit. But now Steve and I have kids, it will be structured hanging out time." Ingrosso looks at the three of them as bringing different elements to the house music table: "Steve has his underground beats, Axwell is more melodic and I'm more somewhere in between," he reasons.

As Axwell points out, one thing has changed since The Early Days: Steve and Ax are now proud parents while Sebastian is left holding the proverbial baby and keeping an eye on the grown-up kids he's known since school. Has it made things harder or easier, we wonder? "EASIER!" blasts Axwell back. "I think that your kid creates that balance. But the reward is so massive, even travelling to Oz for thirty hours it's worth it. When you're travelling or in the studio, your time is limited so you make the most of it."

And what of Masquerade Motel, the Ibiza home of the Mafia? It's a club concept that's been picking up plaudits since the season begun. Is it a similar vibe to last year or different, we wonder? "I hope that it's not too different," says Axwell. "It's just faster and more polished and we're drinking more gasoline. I guess that the difference with Ibiza is it's our second year so we have some routine and experience. The first year is about building your crowd so hopefully we can harvest some fruits from the crop we planted last year. I think we're more relaxed. As for the club, it's an intimate party vibe – we want you to feel like you're a part of a private after-party."

The other thing that's changed is Swedish House Mafia have signed a 360 deal with Virgin/EMI. As they all acknowledge, it's a Big Deal. Ingrosso again: "it's a long term commitment and they're involved in gigs and live shows as well as the music. SHM is bigger than any of us – and we needed a serious partner to control it and that's what they do." But who and what have Virgin/EMI signed exactly? It's three people, three producers and three pairs of eyes and ears perfectly aligned together. And the deal is a huge step forward for dance music and DJ culture suggesting that major labels are showing faith in electronic music again. Their next single 'Miami 2 Ibiza', meanwhile, will feature Tinie Tempah. Axwell again: "I'm so pleased about this. It's so nice to be a part of something that's bigger than yourself. We all have our solo careers but this excites people on a different level."

So life is looking good for the Mafia right now. "What we do: it's a show," reasons Seb. "Look at Brixton: it's a show. People want confetti and they want to get something out of it. You can't just DJ and look at your shoes! Now dance music is really big and we have an opportunity to take this further." But we'll leave it to Axwell to have the final word as he's in a particularly thoughtful place at the end of the interview. "I think that it's a lovely job to DJ and produce and share the passion for music that we have. It's pretty simple and very natural. We're not a manufactured thing – we're musical brothers."

miami to ibiza is wel vet

﻿The boys are back