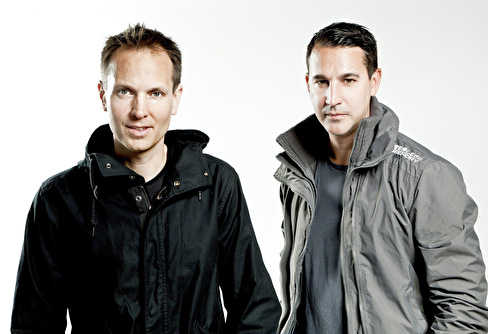 A new introduction to the discreet and legendary German electro-wizards blank+jones on the release of their latest collection of collaborations, beats and various mesmeric sonic certainties - "The Logic of Pleasure":

1. Here, for your consideration, are blank+jones, who exist as much as they ever did inside their own dream of rhythm, at the fast neon centre of all cities, at the soothing edge of the sea, storming down the eternal autobahn, swooping through space and across time, with a new collection, perhaps an album, perhaps a collection of tunes and treatments, perhaps an electronic manifesto, but definitely something for your mind, and your body, and the places in between.
→ lees meer
A new introduction to the discreet and legendary German electro-wizards blank+jones on the release of their latest collection of collaborations, beats and various mesmeric sonic certainties - "The Logic of Pleasure":

1. Here, for your consideration, are blank+jones, who exist as much as they ever did inside their own dream of rhythm, at the fast neon centre of all cities, at the soothing edge of the sea, storming down the eternal autobahn, swooping through space and across time, with a new collection, perhaps an album, perhaps a collection of tunes and treatments, perhaps an electronic manifesto, but definitely something for your mind, and your body, and the places in between.

2. "The Logic of Pleasure" is blank+jones first collection of original material since their 2004 Monument album.

3. They materialised as recording artists in 1997 with a single called Sunrise, and since then, as a combination of disc jockeys and musicians, travellers and dreamers, party planners and thinkers, movers and shakers, businessmen and pleasure seekers, chill-out emperors and rave gurus, lo-tempo sweethearts and energetic pop masterminds, trance specialist and dance heroes they have had numerous hit singles and albums in their home country of Germany.

4. blank+jones, loving to work with great singers and other minds from different musical worlds, have made, mixed and arranged electric mood music in collaboration with such individual talents as The Cure's magical Robert Smith, the uncompromising poet provocateur Anne Clark, the hyper emotional Canadian singer Sarah McLachlan and Propaganda's surreal chanteuse Claudia Brucken.

5. Their latest collection "The Logic of Pleasure" continues their tradition of teaming up with unique singers and temperaments and features some tantalising collaborations. The combination of blank+jones and the enigmatic, iconic, tender voiced Bernard Sumner – of Joy Division, New Order and Electronic – is naturally a dream, as Sumner's fragile yet bouyant melancholia slips beautifully into, and out of, blank and jones very own electronic sense of the epic. blank+jones continue their relationship with Dusseldorf and London's Claudia Bruecken. As always she fits perfectly into the blank+jones human-machine scheme of things, her dramatic voice and their dramatic dynamic totally in psychic synchronicity. Confirming their inspired eclectic taste and their love for experimentation, blank+jones also team up with audacious New York electro-erotica torch singer Vanessa Daou, cult electro-pop classicists Trademark and deviant German pop singer Bobo of Bobo in White Wooden Houses (she appeared as the angel on dark rock group Rammstein's 1997 song Engel.) "The Logic of Pleasure" has itself been mixed in collaboration with Bob Kraushaar, the Pet Shop Boys engineer of choice for the past two decades. As always blank+jones discriminating, open minded musical judgement is impeccable, and they're forever committed to looking into dark eccentric corners, as well as the obvious lit up pop places, for inspiration and surprising potential partnerships. Further proof of their ambition to radically merge sound and ideas, the acoustic and the electronic - a recent performance project at the Tonhalle Dusseldorf that combined blank+jones with the Robert Schumann Chamber Orchestra conducted by Alexander Shelly.

6. As intercontinental men of mystery in the full glare of publicity, as rave favourites and ambient entrepeneurs, as bliss boys and trance gods, blank+jones, demonstrating their love of life and a lust for sensation, have made a number of contributions to the pioneering Café del Mar chill out albums and also conceived their own acclaimed series of beautifully produced chill out albums. The blank+jones Relax series – from edition one to edition three - demonstrate that the unit know as much about producing calm, dissolving, reflective atmosphere as wiring up flash, energising city music.

7. Meanwhile, their charged, transporting, intensely jubilant Mix albums – from Volume 1 to Volume 3 – showcase blank+jones as being geniuses of trance, serious masters at captivating international hedonists dedicated to losing their mind and finding their body, or losing their body and finding their mind. As in demand remixers, they have worked on tracks by Moby, Yello, Pet Shop Boys The Killers, Chicane . . .

8. For the thrill of it, because of an addiction to airports and airplanes, night time and pleasure, blank+jones travel the world relentlessly as if intending one day to play shows simultaneously in cities on five continents. They're welcome as elite techno-romantic thrill giving specialists around the world – in the best nightclubs in the most modern cities, bringing steam, heat, heart and beat to major events such as Mayday, Nature One and Love Parade. They've visited Russia, Poland, Canada, Mexico, South America and the Netherlands. Following their inspiring collaboration with Robert Smith on The Cure classic A Forest they are increasingly in demand in the USA, as well as regularly treating fans closer to home in Germany and the Netherlands.

9. A blank+jones set is a unique live extravaganza, a spellbinding presentation of blank+jones music mixed with carefully chosen non- blank+jones music in the free flowing context of a dj set. The editing and mixing is done on the night for the night, wherever they are in the world, so that each performance is unique, a combination of recorded sound and improvisation perfectly tailored for the audience and the environment. blank+jones never betray their dj roots, but inventively combine dj-ing with their increasing boldness and ambition as an acclaimed electronic pop group in their own right.

10. So now that their 9th album "The Logic of Pleasure" is to be released, the time has come to ask – who is, what are blank+jones ? And the answer is, and isn't, that they are Piet Blank and Jaspa Jones, with, in the studio, the production plus of Andy Kaufhold: that they are a mobile, time travelling, world conquering hybrid of production team, sonic theorists, lifestyle organisers, post-real DJ's, musical dreamers, pleasure programmers, extreme party planners, emotional technicians, mood arrangers and audacious electro-explorers. "The Logic of Pleasure" is their most complete and imaginative collection yet, the ultimate proof that blank+jones are majestic masters at arranging pure listening pleasure.

Noting that when the time comes the discreet and legendary German electro-wizards blank+jones release a new single organised in collaboration with Manchester post-punk visionary Bernard Sumner.

1/ The collaboration between blank+jones and Bernard Sumner, of Joy Division, New Order and Electronic, is called Miracle Cure, and it is the first song to be taken from this years very special blank+jones album of beats, treats and collaborations, The Logic of Pleasure.

2/ Bernard Sumner is high on the list, if not the highest, of those musicians, writers and singers that have influenced blank+jones fascination with mood, intoxication, romance and rhythm.

3/ The combination of the sure, vibrant blank+jones and the enigmatic, iconic and tender voiced Bernard Sumner is naturally a dream, as Sumner's fragile yet bouyant melancholia slips beautifully into, and out of, blank and jones' very own electronic sense of the epic.

4/ The collaboration is the sensational result of electronic communication involving email and MP3 set up during 2007. Sumner wrote and sung his part after completing work with New Order on the soundtrack for Anton Corbijn's award winning film about Joy Division, Control.

5/ Miracle Cure will appear as the song it is and also as a brilliantly arranged series of energising/lounging uptown, down town and across town mixes from the blank+jones studio, and also from Manchester born Berlin based hypno-trance pioneer Mark Reeder, the currently on fire electro-obsessive Canadian Glenn Morrison, the prolific trancefrenzied German master Martin Roth, the Anglo-German electro-adventurers Onetwo and Scandinavian chilltronica club kings Lulu Rouge

6/ It says something about the reputation and ability of blank+jones that the discriminating Sumner, a genius of melody, wished to work with blank+jones, and that the collaboration has produced a song that can live with the best of Sumner's ingenious, smart and infectious pop songs.

7/ More news soon about the ninth blank+jones album The Logic of Pleasure and the record's various enterprising collaborations, including Miracle Cure with Bernard Sumner.