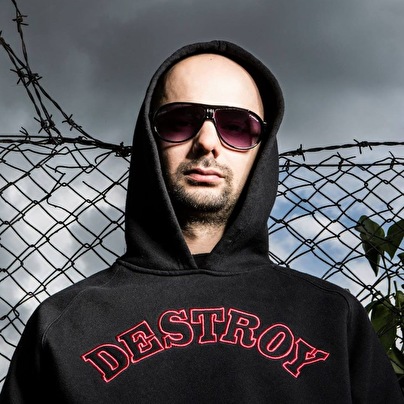 To some this dizzying array of roles might be a little too much to handle, but Jindrich Brejcha, better known as Forbidden Society, takes it all in his stride. A lifelong fan of the tougher side of music, he cut his teeth to the gritty sounds of punk and metal before being introduced to their electronic equivalents – gabber, hardcore and breakcore – at which point his life changed forever. Through immersing himself in these harder-edged electronic sounds, it wasn't too long before Forbidden Society found himself evolving into the artist we know today.

"I am an open-minded person and I just love music in general - good music, from D&B, electro, techno, metal, punk - it just needs to have energy and drive for me. When I was young I listened to lots of punk and metal until a friend played me a tape with some early rave on it. After that I began to DJ with vinyl at underground raves and squat parties around CZ. When I first started producing my own tracks I was into digital hardcore, but I got really excited when I discovered drum & bass producers like Ed Rush and Technical Itch. The sound they were pioneering was incredible and I became more and more interested in making my own take on it."

It wasn't long before Forbidden Society got his first break in drum & bass as one of his tracks was picked up for release by Freak Recordings owner, Dylan, who continued to champion his hard and heavy take on D&B. "After that I quit my job," explains Forbidden Society, "The gigs started to come in and I was living full time from my music." From here Forbidden Society's stock continued to rise with releases following on Counterstrike Recordings, Obscene, Algorhythm and several more labels before 2010 saw him launch his own self-titled imprint.

Since then Forbidden Society Recordings has been the home of his own releases as well as dropping music from producers including Current Value, Counterstrike, Donny, Katharsys, Dub Elements, Receptor and local Czech talent Computerartist. Not only has the label been home to some killer D&B singles, but Forbidden Society's 2012 album 'To The Threshold' and 2014's 'Thronecrusher' have both been released via his own imprint resulting in international recognition and the opportunity for Forbidden Society to tour across the globe – from Paris and Amsterdam, to Columbia and Japan, even being the only Czech producer booked to play at the world's biggest indoor D&B event, the legendary Pirate Station in Russia.

"I never prepare my sets like some DJs do, I just think about the first track or two I want to play and then see the reaction of the crowd. I always try to add as much energy as I can, but I also add a lot of variety to my sets. I'll play some hard D&B and mix it up with 4/4, I watch the reaction and I play what feels right at the time."

And if the reactions to his DJ sets, his music and his record label are anything to go by then this producer is getting stronger by the day. Never one to rest on his laurels, it's clear that what's around the next corner could be the biggest and best project this talented Czech artist has conceived yet, and you need to be there to witness it. So what are you waiting for, isn't it time you joined the Forbidden Society?