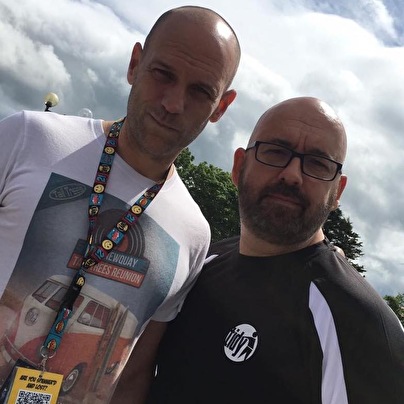 Founders of the Tidy Trax label empire, this dynamic duo's entrepreneurial skills and forward thinking have established Tidy as the undisputed brand leader in hard dance. The Tidy label and offshoot imprints, their numerous compilation CDs, award winning tidy.com website, massive Tidy Weekender events, not to mention their Big Night Out solo events, have meant that the Tidy Boys have been at the centre of all things good in hard dance for a decade now. Before they came up with Tidy Amadeus & Andy both had a fairly prolific music and DJ career themselves individually.

Andy Pickles from Rotherham, originally a studio production engineer for his fathers company Music Factory went on to be the main man behind the Jive Bunny phenomena in 89, knocking up 3 number one hits and selling over 15 million records worldwide at the tender age of 20. Amadeus started DJing way back in 1982 with his own mobile disco called Dr Stiffs Roadshow, moving into to club DJing and being at the forefront of the house movement back in 86 he went on to produce early hard rave tracks with Rolf Harris called Stylophonia and also had three big TV advertised albums in the early 90's called Hit The Decks.

Andy and Amadeus were both studio producers making megamixes and remixes for the Music Factory DJ only service and thats how they forged their friendship and working career. Both having a similar sense of humour, a passion for music and a ethos of having fun with everything they do. They set up Tidy in the summer of 95 as an outlet for their own productions, some like Hyperlogic Only Me had already charted on major labels such as London Records and the inspirational Hooj Choons. Alongside fellow producer Paul Janes the boys went on to create a new sound and ethos for the harder generation, producing tracks for the yet undiscovered Lisa Lashes, Lisa Pin Up and Anne Savage. The Tidy brand was also a breeding ground for new producers and DJs, and it was Andy and Amadeus who spotted the then very young Eddie Halliwell.

To help promote their own productions and to push the label to worldwide status the boys decided to get their headphones out of the closet and in March 99 they teamed up as a DJ duo called the Untidy DJs, with their first gig in Jersey. After a then been thrown in at the deep end and playing to 9000 people in South Africa and a few legendary sets at Sundissential the Untidy DJs became The Tidy Boys. The name changes was due to a few reasons, one is Uncle Madders at Sundissential use to affectionately refer to them as the Tidy Boys, also it had a better ring to it and was a perfect name in helping the promotion of their own brand. Some people have said that the Tidy labels success rapidly grew from 99 due to the boys being on the road. Traveling the world and playing in Australia, Las Vegas, Tokyo, South Africa, Ibiza, New Zealand, Hong Kong, Norway, Finland and even Jersey has certain spread the Tidy message.

The creativity, passion and fun that the boys have delivered both in the studio, in albums, on Tidy TV channels and in live sets has been an inspiration to many. They have never taken themselves seriously and always had their tongue firmly planted in their cheeks but The Tidy Boys have proved that they are true entertainers and love what they do.

In 2005/6 the Boys headlined key festivals such as Creamfields, Godskitchen Global Gathering, Escape Into The Park, PlanetLove Festival and Dance Valley, while also pulling off the surprise package in Ibiza last summer with the packed out Tidy vs Extreme events held weekly at Es Paradis - officially the most successful hard dance event in the history of the White Isle. From mixing Euphoria albums to putting on massive weekender events in Prestatyn Amadeus and Andy seemed to have had a fun filled 11 years so far... but what next?

Although Amadeus and Andy created the Tidy brand and label, they have never officially owned it on paper, not to bore you too much with company directorship and legal ownership, but the Tidy brand is and always has been a sub-brand owned officially on paper by the Music Factory Entertainment Group - The boys have since tried to buy the rights to their creation from this company with no success. Both Andy and Amadeus have both been building other businesses outside of the music industry which now takes up a lot of their time. Andy has a very successful company called U-Explore which is a vocational education software company aimed at 14 to 16 year olds and works closely with schools and government projects, even many visits and meeting at 10 Downing Street. Amadeus who left Tidy in 2006 set up his own creative design agency called Motel Red, became the creative director for Addictive Interactive, Addictive Merchandise and U-Explore as well as becoming co-owner and director of Slinky in March 2007. In June 2011 Amadeus set up a new Creative Media company called Square Daisy which specialise in rich media and content for iOS Apps.

2011 also saw the Tidy Boys cutting back on some of the DJ gigs and being a little more selective on when and where they play, due to business commitments and both having families. However it was not the semi retirement and taking life easy as many would think, these boys just can't sit still and the Boys got the old team back together for the sellout, Tidy Weekender Reunion. Add to this a new single with BK, All Alone, and the big album of 2011 The Hard House House Bible. Also lets not forget the Tidy TV sessions, causing a bit of a storm with their lighthearted yet honest opinions about Hard Style, causing a YouTube sensation not seen since the sneezing Panda

The Tidy Boys in 2012 continue to play selected smaller gigs and return to their routes of where hard house started. Their sell-out Tidy Boys Limited Tour has proved to be a huge success and has captured the imagination of passionate hard house clubbers across the UK. Preferring to play intermit venues gives the boys a chance not only recapture what the scene is all about but also more cost effective for promoters who have always wanted The Tidy Boys at their venue.

In September 2012 the boys also launch a new lifestyle brand and label called IDEAL this has quickly become the most talked about project since the birth of Tidy. Launching this new exciting label and events company has quickly propelled the Hard House scene to back to its former glory. 3 massive Christmas Parties in late 2012 started the ball rolling as well as the first release on the label (Ross Homson Politically Incorrect) being one the biggest tracks of the year. The Ideal juggernaut continues in 2013 - with the launch of the Ideal Weekender in Southport, a new Ideal DJ Management company, plus new tours and event around the UK and Europe.

Phase 2 of the Tidy Boys legacy has begun - which sounds Ideal...

Wat is the name of this song....
The last time that tidy boys was playing on HQ amsterdam
laatste aanpassing 16 november 2018 22:31