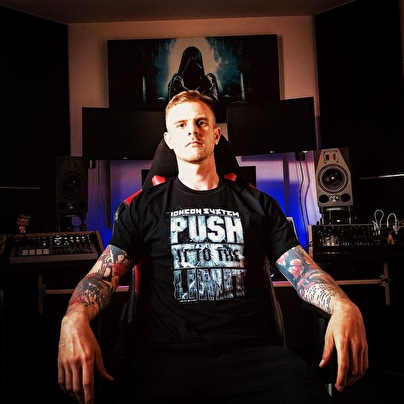 Armed with a powerful live-set full of a hybrid mixture with clanging snares & brutal bass power, Igneon System is one to watch.

Igneon System, born and raised in Belgium, started his love for music in the 90's. An interest which turned into DJ-ing when Davy took on drum 'n bass vinyl, mixing it up with hardcore. Together with his hometown friends they raided the decks at local parties and the tone was set.

Following his growing passion for music, Igneon System got interested in the power of production. Controlling crowds by, first up programming electronic patterns of rhythm, Davy bought himself a little studio to explore the production process. In that period he discovered his own sound, a combination of UK Hardcore, hip-hop and drum 'n bass influences. It didn't take long before people started to notice this energetic mixture of sounds. His first official recognition came in the form of signing his first record at Elektrokut in 2008, followed with 'Fearcrawler' on Pandemonium. A track which was also featured on the Operation Obliterate mix-CD The DJ Producer mixed for Audiogenic. Since, Igneon System has released tracks on Rebelscum, Nekrolog1k, Motormouth, The Third Movement, PRSPCT and Industrial Strength.

Armed with a powerful live-set full of a hybrid mixture with clanging snares & brutal bass power, Igneon System quickly got respected and played at almost every location in Belgium. His sets have caught on at Liberty White, Club r_AW, Dissonant Festival, Bug Klinik, Breakcore Gives Me Wood, Ground Zero, The Qontinent, QORE 3.0 and many more. Do It For The Haterz

Nice live act at the INSANE Festival 2010 man !!!
Your belgium parties "abused muzik" are the best

Do It For The Haterz

Coldest In The Gang
Nekro Money
Like A Criminal

Check out my the clips of my new ep on Agnost1k