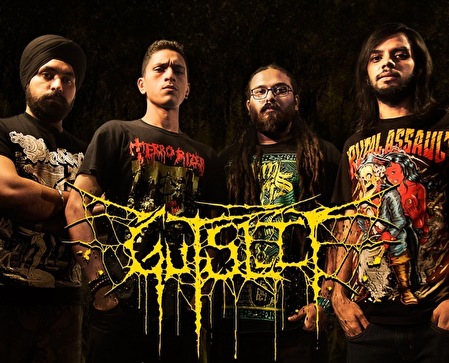 In 2007, the journey began when four like-minded musicians came together in search of something that would stand out and not only hit the mark, but eat it alive. GUTSLIT spent the first years of their career relentlessly playing their instruments and fine-tuning their craft. After dedicating two years to developing their sound, GUTSLIT released their debut music on a split album titled "Contorted Mutilation" (Cataleptic Remains Prds) with French goregrind veterans PULMONARY FIBROSIS. The reviews and feedback on the debut were welcoming and primed GUTSLIT for great things. Rolling Stone India said it well in an article headline, "How Mumbai brutal death metal band GUTSLIT turned into one of the most intense live acts in the country".

GUTSLIT was locked and loaded as they made their live debut supporting the legendary PUTRID PILE in early 2010. GUTSLIT's live show made an impression on the heavy metal community and opened up new opportunities for the band to perform on numerous occasions including, MEATFEAST, INDEPENDENCE DEATH FEST, ENTOMBED METAL FEST and more.

GUTSLIT spent 2010-2012 promoting their debut release, relentlessly playing live and preparing for the release of their sophomore album. This album, titled "Skewered in the Sewer" would be the bands first full-length, released worldwide by Ghastly Records and Coyote Records in 2013. The album showcased GUTSLIT's potential and gave listeners exactly what they were anticipating. "Skewered in the Sewer" showcases nine gut-wrenching tracks including a guest vocal feature by Malika Sundaramurthy of ABNORMALITY on the track "Circumsized With a Chainsaw".

The release of "Skewered in the Sewer" was exactly what was needed to not only get wide spread attention, but to also get GUTSLIT booked on numerous international live appearances. The band went on to appear at festivals such as, OBSCENE EXTREME FEST, DEATHFEAST OPEN AIR, BIG 69 FEST, BANGALORE OPEN AIR, BRUTAL ASSAULT FESTIVAL and more. GUTSLIT was the first band from India to appear at prestigious international festivals such as OBSCENE EXTREME, DEATHFEST OPEN AIR and BRUTAL ASSAULT FESTIVAL.

In 2015, GUTSLIT went out on their first European tour called the BRUTAL GROOVES 'N' GRINDING MOVES EUROPEAN TOUR with STILLBIRTH, SPLATTERED and CREPITATION. The tour spanned across several countries and established solid ground for GUTSLIT throughout new territories. GUTSLIT would share the stage with many notable acts such as CANNIBAL COPRSE, NAPALM DEATH, CARCASS, MISERY INDEX, CATTLE DECAPITATION, MARDUK, BELPHEGOR, THE HAUNTED, CARNIFEX and many more.

As GUTSLIT completed a successful cycle for the debut full-length, it was time to step things up for their sophomore album. Appropriately titled "Amputheatre", it was released by Transcending Obscurity Records in 2017. Metal Injection gave it 8/10, New Noise Magazine a 4.5/5 and many others such as No Clean Singing, Heavy Blog Is Heavy, The Toilet Ov Hell, Dead Rhetoric, Rolling Stone India and others had strong praise on the album and direction of GUTSLIT. Critics have agreed and rated "Amputheatre" as the best brutal death metal album from India.

The cover art for "Amputheatre" is a remarkable work created by the one and only Eliran Kantor (TESTAMENT, HATEBREED, ATHEIST, SOULFLY, FLESHGOD APOCALYPSE, THY ART IS MURDER). Eliran's vivid visions paired with GUTSLIT's twisted themes was a perfect match to give fans an extremely grotesque visual presentation of the album. For the audio element, GUTSLIT brought in Victor Bullok (DARK FORTRESS, TRIPTYKON, PESTILENCE, OBSCURA) to master the album and ensure an intense delivery of the final material.

GUTSLIT went on to promote the album in Europe alongside STILLBIRTH, CARNIVORE DIPROSOPUS and SPLATTERED on the AMPUTHEATRE EUROPEAN 2017 ALBUM LAUNCH TOUR. The tour stopped at DEATHFEAST OPEN AIR and MEH-SUFF METAL FEST adding prime festival exposure to the album release and tour. The European excursion was followed shortly after by the AMPUTHEATRE INDIA 2017 ALBUM LAUNCH TOUR with BENIGHTED.

In the summer of 2018, GUTSLIT partnered up with manager MARK MÜLLER from the United States who previously worked with bands such as INTERNAL BLEEDING, THY ANTICHRIST, ABIOTIC, SOREPTION, ATHEIST, CURRENTS, EMPYREAN THRONE, BEGAT THE NEPHILIM and others. Putting this additional force and team effort behind GUTSLIT has strengthened the powerhouse and primed the band for more future opportunities.