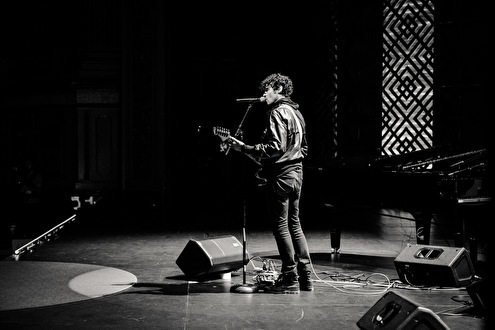 "Golden Walker started as a mantra about carrying a message and communicating authentically," Dailey offers. "Connection, itself, and the amount of connecting cannot be the end goal any longer. There is too much loneliness for that to be true. Nurturing and strengthening the important connections we have is a way forward -- the emotional economy of the future."

The album's title came from a chance encounter with a sculptor in France who beckoned Dailey to his workshop after a show. The craftsman was so moved by the music that he welded a piece, right then and there, of a man walking with a golden nugget on his shoe. As he told Dailey, "When I heard you tonight through the walls of my workshop, I heard real communication. You have to keep communicating like that. You have to carry the gold, protect it."

Going into the writing and recording of Golden Walker, Dailey knew he had to grab people's attention -- and hold it -- in order to make that communication work. The music had to engage with the listeners so that they would, in turn, engage with the music. If not, "the album would tumble on without you," he says. "Each song, in both its tracking and composition, is there to keep the listeners' hearts and ears awake, not just happy. Just when you understand the pattern, it slightly changes on you, but leaves a thread to hold onto."

From "It Already Would Have Not Worked Out by Now" to "He Better Be Alive," the thread it leaves and weaves throughout is one of accountability. As Dailey sees it, accountability is necessary for compassion and connection, humility and humanity to survive and, hopefully, thrive in this world.

The album finds Dailey facing his dreams, both the literal and metaphorical ones, and trying to measure them against the reality of his life, as evidenced in the album's gentle opener, "The Submariner," as well as its buoyant closer, "Ultimate Companion." It also sees him digging into the darkness that surrounds him and letting the light transform it. "Bad Behavior" was originally meant to be a finger-picked folk song inspired by the Women's March of 2017, but it shape-shifted into a groove-based pop tune a few days before recording. The message holds, still, just set against a lighter backdrop. "When there is cognitive dissonance within the meaning of the song," Dailey says, "I find a need for the production be an outlier from where I usually might operate to help contend with the absurdity."

The album's anchor is another quirky, but sure-footed cut, "When It Dies." Tethered to the idea that "all we ever really want is not to be forgotten," the piece is wistful, yet contemplative.

Personal anxieties come into sharper focus on "Today Is Crushing Me" and "Tell a Friend," two seemingly disparate tracks that both recognize reaching out for connection, whether with a friend or a song, as the best way to get through a deeply dark day. "Even in the darkest moment, if I just nudge my foot forward an inch, something will come of it, and I'll be beyond that moment," Dailey says.

Dailey has music, just as he has moments, and he uses one to communicate and connect to the other. In songs like "He Better Be Alive" and "Up to Your Heart," those elements are as pointed as they are poignant. From the inside out and the outside in, with Golden Walker, Will Dailey lives up to the promise and premise at the heart of being a songwriter.