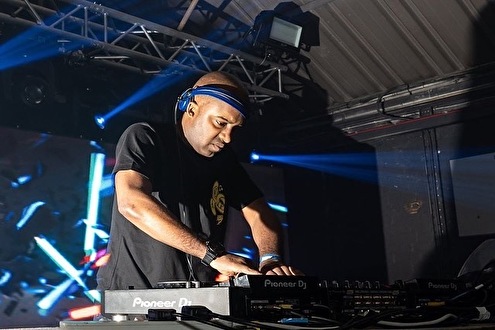 His passion for records and raving grew steadily until his early DJ career was brought to an abrupt halt after his big brother moved out - leaving him without access to his beloved turntables. This brief hiatus was short lived and around 1995 Escape began to make his first impressions on the emergent jungle scene.

On one of his increasingly frequent visits to Pure records, he was dubbed 'Younga Zone' by MC Lenni as a nod to his big brother and mentor T-Zone who worked behind the counter. This name stuck with him throughout his early DJing days - although at this stage most of his mixing was restricted to after school sessions with his mates rather than major raves or club nights. Things began to change when Escape crossed paths with another artist who would go on to make huge waves in the Midlands scene, DJ Hazard.

At this stage, both were young, broke DJs, hungry for success and doing everything they possibly could to make a name for themselves. Bookings were snapped up regardless of size or setup and they were soon playing to crowds of between 5 and 100 people every week – often for little more than the love of the tunes and a taxi fare home. Before long, Escape was to join Hazard on his weekly radio show on Unity FM. Although the show was well received and opened plenty of doors for the duo, it was difficult being the only drum & bass DJs on an otherwise ragga dominated station and this led to Escape looking for other pirates where his musical policy and jungle selection would be more readily accepted.

With Kool FM Midlands rapidly establishing itself as the leading jungle pirate in the area and rivalling its London counterpart in terms of the exposure it could provide to up and coming DJs it was clear to Escape that this was where he needed to be. Dogged persistence and a refusal to take no for an answer led to a very large phone bill and no less than five separate demos being sent to Kool. Eventually his perseverance paid off with the reward of a Saturday morning slot that a lot of local DJs would have given their right arm for.

Although up to this point he was still going by the name of Younga Zone, the decision to rebrand himself DJ Escape was made after careful consideration and some sound advice from Joker Records' Pugwash. As he established himself on Kool FM through hard work, innovative selection and a rapidly expanding following he moved up through the rankings to the prime time 8-10 Sunday evening slot with MC Biggie. Unfortunately, as with so many pirate stations, things came to an abrupt end for Kool in 2002, causing Escape to make the move to Silk FM where he is still going strong to this day.

It wasn't just behind the decks that Escape was making for a name for himself. Getting involved with event promotion in and around the Birmingham area led to more exposure and bookings began to come in thick and fast from around the UK and overseas. Escape also dabbled in the field of label management when he set up 2nd Strike Records. Although the label only had one release (DJ Hazard You Ready/Metallic Blue) due to distribution problems, experience was gained and lessons were learned.

Recent times have seen the formation of 3D Mode recordings which features other local artists who made a name for themselves on Kool FM Midlands such as Devize, Skitty, Biggie, Hazard and Accapello to name but a few. 2006 also saw Escape set up a brand new label called Muzik Hertz. The label gave breaks to artists such as Dj Complex, Dj Rusty and P.A. As well as a record label, Muzik Hertz has gone on to do a number of sucessfull events around the Birmingham, evesham, Telford, Stourbridge, Coventry and as far as Poland and America. As well as running Muzik Hertz, Escape works along side Dj Torment promoting WTfunk which prides it's self on pushing new talented artists and has already seen the likes of Netksy make play his first uk booking.

Fast forward to recent times, Escape has bought Broken Minds back from the dead with the original Broken Minds CEO, Phase2. They host Broken Minds every month at the famous Hare & Hounds in Birmingham. As well as Broken Minds, Escape hosts We Love The DNB and still continues to host Muzik Hertz parties across the country.