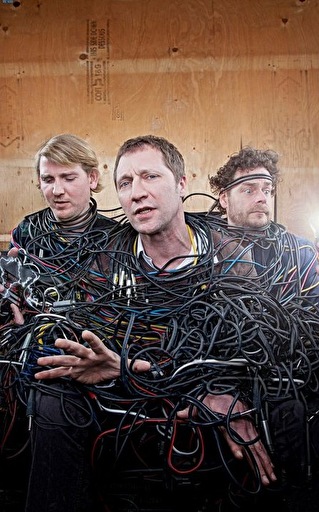 In June 2012 Wim Plug, Oscar De Jong and Mark Kneppers collectively Kraak & Smaak had dropped Mixed Feelings - a collection of new tracks, remixed highlights from their Electric Hustle album and the cream of the remixes and collaborations they had worked on and then finished up the punishing touring and festival merry go round they had been on since the release of their last studio album in 2011. They headlined Beat Herder Festival in the UK and played main stage sets at most of the other big European festivals but when summer was over it was time to retire to their Leiden studio and plot the next record.

First in the door was Sam Duckworth of Get Cape Wear Cape Fly with whom they had crossed paths at many festivals and started writing together remotely before coming together for some studio sessions. The result of those sessions will certainly be a single from the album - the majestic Good For the City.

As the K&S sound had got a little deeper the boys felt it was time to look up the singer on one of their biggest hits "Squeeze Me" the incredible Ben Westbeech. After a magical studio session in Leiden, the newly Amsterdam resident Mr Westbeech had co written what is shaping up to be their biggest hit – the positive house anthem "The Future Is Yours".


A writing session with Geordie bluesman John Turrell was next on the list with two killer tracks resulting and with some additional sessions with Joi Cardwell, Stee Downes and Janne Schra in the bag, the album was starting to take shape.

The dutch boys have been on a continuous upward curve since they first broke out of Leiden with their debut album Boogie Angst and have never looked back since, playing massive shows at the cream of the worlds festivals from Glastonbury to Detroit Movement, EXIT to Bestival to Sziget and DJ'ing at the world's best clubs.

In 2011 they released their third studio album Electric Hustle and the effects of that release are still rippling right now. Dynamite from that album was a # 1 radio record in the US, Let's Go Back was in Mixmag and DJ Mag's singles of the year and was one of the longest serving releases in the Beatport Deep House chart.

With National radio and TV performances locked down in their native Holland to promote The Future Is Yours and Pete Tong in the UK and Jason Bentley in the US spinning the record this album looks set to make even bigger (Chrome) waves than its predecessors. do i need too say more?