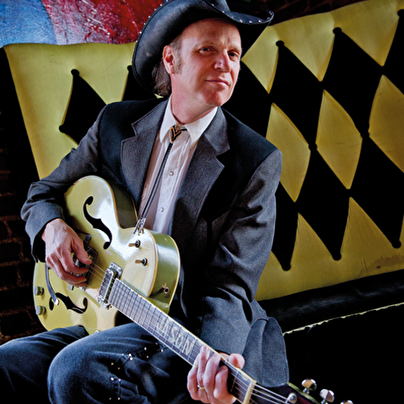 Their instinctive ability to combine traditional country music with high-energy punk rock has not been surpassed to this day. In 2008 they were awarded the Americana Music Association Lifetime Achievement Award for Performance. There is an exhibit of them in the Country Music Hall of Fame.

But Ringenberg's story does not stop there. In 1999 the "Godfather of Americana" (Mojo) decided to go solo. He has released five solo records, with everyone from the BBC to USA Today lauding his songwriting. Touring the world relentlessly as a solo barnstormer, The Times

called him one of the most exciting performers of his generation. So don't go to his concerts expecting to see a sensitive singer-songwriter sitting on a stool. With his acoustic guitar and high energy charisma he WILL rock the house.

These days, when not performing for adults, he is head-over-heels involved in his children's music character, Farmer Jason. He has starred in the It's a Farmer Jason video interstitial program airing on several PBS stations around the United States, earning one Emmy and 4 Emmy nominations. Farmer Jason's records have won numerous awards, including the Parents' Choice Gold Award and the Los Angeles Times' Children's Record of the Year list.