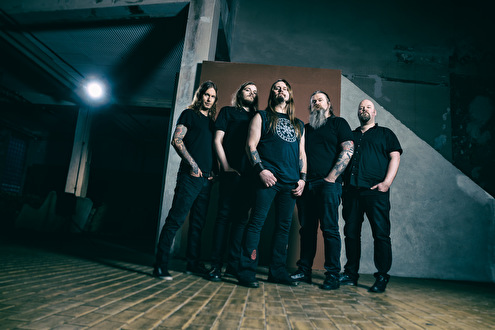 Formed in Bergen, Norway, in 1991, Enslaved followed their own singular path from the very start. As they emerged from the nascent Norwegian black metal scene of the early '90s, guitarist Ivar Bjornson and vocalist/bassist Grutle Kjellson exhibited a uniquely eccentric approach to making extreme music. Adventurous and progressive where many of their peers were insular and restrained, Enslaved's reputation grew rapidly in the wake of extraordinary, epic albums like their debut Vikingligr Veldi and its strident follow-up Frost (both 1994). By the late '90s, the band had morphed into a much more ingenious and ground-breaking beast: always retaining that essential link to their extremist roots but fearless in their pursuit of new ways to express their wildest ideas.

Routinely acclaimed as a powerful and ferocious live band, Enslaved entered the 21st century by flexing new muscles on the acclaimed likes of 2003's Below The Lights and its groundbreaking successor, Isa (2004) – for which the band won a Norwegian Grammy award. Increasingly admired in the prog rock world while never losing that all-important bedrock of metalhead support, Bergen's finest hit a rich vein of form as the years passed, with albums like 2008's post-rock-fuelled Vertebrae and 2010's elegant and grandiloquent Axioma Ethica Odini gleefully redesigned the Enslaved musical universe.

In 2015, Enslaved released their 13th studio album, In Times. A tour-de-force of hypnotic prog intensity and scabrous, blackened pomp, it exuded an air of completion and finality that led perfectly into 2016's extravagant celebrations, as Enslaved marked their 25th anniversary with some truly life-changing shows that explored all shadows and hidden corners in the band's colossal catalogue. Two years later, they released the universally praised E: a typically bold and fearless statement from this most inventive of modern metal bands and a thrilling sideways step that harnessed the spirit of old and set it loose in a whirlwind of stormy imagination. Universally praised, it duly earned Enslaved their fifth Norwegian Grammy win.

Since the release of E, Enslaved have been dedicated to spreading their gospel of musical fearlessness around the world. They once again conquered Europe and North America during late 2017 and early 2018, and will be performing at festivals throughout the summer, including appearances at CopenHell, Wacken Open Air, Hellfest, Beyond The Gates and Psycho Las Vegas. Determined to keep everyone happy, they will also be hitting Australia and Japan for a handful of dates in the autumn, with further plans to explore more of the planet in the very near future.