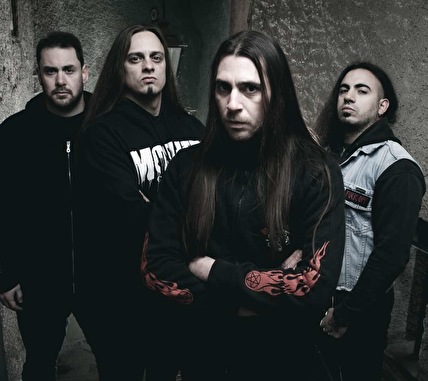 Back then Suicidal Angels were more of a school band having a good time. After some early line-up changes though, Nick meets Orfeas Tzortzopoulos (drums), and a unique musical chemistry is born. The band records its second demo, "Angels' Sacrifice" (December 2003) and things gradually become more serious. Based on this demo, the band starts promoting itself and the first concerts are scheduled.

During April 2004 Suicidal Angels record a new demo called "The Calm before the Storm", which receives good reviews in metal magazines and fanzines throughout Europe. In September 2004, the band releases an EP called "Bloodthirsty Humanity", which receives even better reviews compared to the previous demos. Meanwhile, the group tries to perform live whenever possible.

It was shortly after the show with Tankard in October 2004, when Themis Katsimichas (guitars) joined the band, at first just to help with the first ever gig abroad (Bucharest, 2005) and then as a full member, teaming with Nick to create a fast and technical thrash guitar duo.

During Fall/Winter of 2005 the band records a four song mini CD called "Armies of Hell", which gets distribution by EVIL RECORDS and hits the stores in Greece in early 2006. The reviews from European metal magazines were once again very encouraging.

In April 2006, bass player Christine decides to leave the band and is replaced by Sotiris Skarpalezos shortly after. The band continues to perform live in concerts both in Greece and abroad (Germany and Poland, Summer 2006).

On October 16, 2006, Suicidal Angels sign their first record deal, with California based OSM Records. The plans for the recording of a full length album are in motion. However, the band still tries to play live as much as possible, knowing full well that that's the only way to become a better act.

Recordings of "Eternal Domination" started in January 2007 and the band spent two months recording, mixing and mastering the album, to achieve the best outcome. When it became obvious that it would be very difficult to do this in Greece, the group didn't hesitate to seek help from abroad and sent the master tapes to the USA, to be mixed and mastered by acclaimed producer Colin Davis in Los Angeles, California.

Shortly after, in April 2007, Rotting Christ founder Sakis Tolis invited Suicidal Angels to become part of Rotting Christ's "Theogonia Balkans tour 2007", giving them their first chance to tour in Europe. It was an opportunity that could not be missed and the band began its first serious attempt to play its music in foreign land.

In May 2007, the band gave one of its most important shows, supporting Kreator in Athens, Greece. Mille Petrozza was truly impressed by the band's performance and, to the band's astonishment, appeared on stage wearing the Suicidal Angels T-shirt the group had offered him as a gift. It was the beginning of a series of fortunate events, as Mille would continue to pinpoint Suicidal Angels as one of the best new thrash metal bands in various occasions.

In November 2007, Suicidal Angels toured along with death metal pioneers Massacre in Europe, as part of Massacre's reunion tour. For the first time they visited many countries in Western Europe, having the chance to get a lot of people acquainted with their fast, technical and furious thrash. They received positive feedback and support throughout the tour and became even more determined to carry on with their vision.

In April and May 2008, the band toured with English thrashers Onslaught and continued to promote "Eternal Domination", building on live performance experience along the way. The feedback was once again highly positive, especially in cities such as Sofia, Bulgaria, where Suicidal Angels had performed twice in the past.

The time had finally come to present the album to the Greek audience. On May 11, 2008, the band performed live in its hometown, Athens, and the Greek fans proved once again that they are the wildest and craziest in the world. That night's show just had to be put on tape, for everyone to experience just what unbelievable support the band receives from its friends in Greece.

Following that concert, Suicidal Angels took a break from performing live and focused on rehearsing new songs for their second album. However, another concert supporting Nile took place in October 2008 in Athens, Greece, where the band had the chance to perform in front of some of the most loyal fans a band can ever have.

In December 2008, bass player Sotiris decided that Suicidal Angels were no longer a priority for him and went his separate way. Currently, Suicidal Angels are taking care of the final details for the recording of the new album, which will take place in March 2009 in Germany, under the direction of producer and Mystic Prophecy lead singer R.D. Liapakis.

In March 2009, Suicidal Angels entered the studio (Prophecy and Music Factory Studios, Germany) under the direction of the producer R.D. Liapakis and recorded the second full length named "Sanctify the Darkness". At the same time, the band took part in the so-called Rock The Nation Award 2009, which was held in partnership with Nuclear Blast Records and Boomer Entertainment as well as highly anticipated print magazines from all over Europe such as Metal Hammer (D, I, GR, E), Terrorizer UK, Rock Tribune B, Scream NO, Metallian F and Spark CZ. Suicidal Angels were picked final winnter from over 1200 band submissions!

After the album was released via Nuclear Blast Records in November 2009, the band went out on several big tours with Kataklysm, Belphegor, Overkill and played all big festivals such as Metalcamp, Sonisphere Greece, Wacken Open Air, PartySan and Summer Breeze. With NoiseArt Records, the band finally found a strong partner and a perfect home as the label is a division of Rock The Nation, wich also does the booking for Suicidal Angels!

Now, with joined forces and full force, after a very successful year in 2010, the thrash metal tank has produced its 3rd longplayer entitled "Dead Again". The amazing cover artwork was created by none other but Ed Repka (Megadeth, Death and more) while R.D. Liapakis of Mystic Prophecy once again produced the band's album. With "Dead Again" Suicidal Angels have again taken thrash metal to another level - tight, aggressive, fast and old school as fuck! That's how they do it!

This is the story so far! Be prepared for fast and furious thrash metal, 'cause when it comes to Suicidal Angels that's the only metal you'll get!