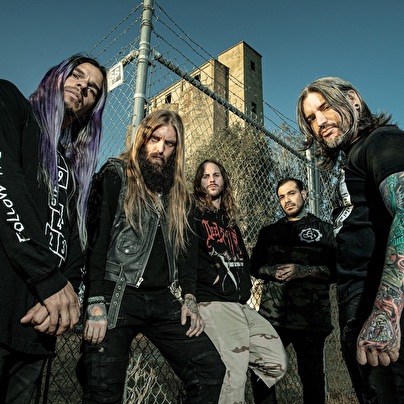 It's the reason their most popular songs have titles like You Can't Stop Me, You Only Live Once, and Inherit the Crown. This is music for those who turn the tables and flip the script, rewriting the narrative for themselves, reclaiming whatever was stolen by doubters, abusers, loudmouths. It's why their sixth full-length album, which finds SUICIDE SILENCE out for blood like never before, is called Become the Hunter. It's extreme music for the extreme resolve to never be anyone's victim.

A cinematic flair worthy of some of those revenge driven antiheroes enshrouds the ten songs that comprise Become the Hunter, making for an atmosphere that's altogether dense and angry. Upon the first taste of the album, Metal Injection declared, "SUICIDE SILENCE stays heavy as hell."

The storytelling in the music videos for "Meltdown" and "Love Me to Death" is no less ambitious. As Consequence of Sound gleefully reported, "SUICIDE SILENCE's crushing extreme-metal breakdowns are in full effect on both songs," with special praise for Eddie Hermida's "death growls and shrieks that hit an impressive range." UK tastemaker Kerrang!

called the band "pioneers" and "groundbreakers" who've made "some of extreme music's most loved albums in recent years."

The tight-knit band's mash-up of death metal, grind and time-signature bending dissonance with structured, focused and undeniable grooves unquestionably shaped and led the emerging "deathcore" subgenre from the arrival of their 2007 debut, The Cleansing. SUICIDE SILENCE named "Best New Talent" at the Revolver Golden Gods Awards and had already dominated the Rockstar Mayhem touring festival by the time 2009's No Time to Bleed broke into the Billboard Top 40. "Wake Up" and "Lifted" became underground classics, as SUICIDE SILENCE transcended the subgenre they helped define and became peers with the bands they'd grown up worshipping.

As Revolver noted in a ten-year retrospective, "SUICIDE SILENCE's second LP defined the shape of deathcore to come. But what really made No Time to Bleed so special is the way it incorporates elements from metal subgenres beyond death metal and hardcore. There are seasick guitar noises reminiscent of nu-metal pioneers KORN, minor-key licks that smell of thrash icons SLAYER, and samples and sound effects manufactured on the assembly line of industrialists FEAR FACTORY."

Produced by Steve Evetts (THE DILLINGER ESCAPE PLAN, EVERY TIME I DIE, SEPULTURA) and mixed by Zeuss (ROB ZOMBIE, HATEBREED, DEMON HUNTER), The Black Crown was the full realization of everything SUICIDE SILENCE stood for and vehemently stood against. Q Magazine called it "a dark, violent and relentless listen." Kerrang! wrote that "true greatness is within their reach."

After beloved vocalist Mitch Lucker was killed in a motorcycle accident in late 2012, Mark Heylmun, Dan Kenny, Alex Lopez, and Chris Garza were joined by a slew of well-known guests (including future frontman Eddie Hermida) at an emotional tribute show. An understanding and supportive audience responded enthusiastically to the October 2013 announcement that the band would officially continue. As SUICIDE SILENCE found new life and empowerment with You Can't Stop Me so did their enduringly army of supporters, who shared in that empowerment.

Like the historical creative and commercial reemergence of AC/DC or ALICE IN CHAINS, SUICIDE SILENCE came roaring back from the kind of tragedy that often ends careers. You Can't Stop Me served as a simultaneous introduction to the band's new singer and a celebration of his late predecessor. Sirius XM's Liquid Metal played the Top 20 album more than any other in 2014.

The band spent October 2015 on the road with KORN and by the following spring, they were in the studio with the producer responsible for KORN's first two albums. Ross Robinson, whose other credits include landmark released by SEPULTURA, AT THE DRIVE-IN, and

TourBeat put SUICIDE SILENCE next to rock music icons RUSH, NAPALM DEATH, and BEHEMOTH as "The Four Best Metal Bands That Have Been Touring for More Than Ten Years," saluting the band's "amazingly consistent" live show stretching back to 2002, as seen in recent years at Knotfest Meets Ozzfest, Rockstar Mayhem Fest, Warped Tour, and alongside MEGADETH, MUDVAYNE and more. It's a visceral, mind-warping experience that demolishes the separation of band and audience.

Become The Hunter reunites SUICIDE SILENCE with Evetts, who produced The Black Crown (2011) and You Can't Stop Me (2014). It was mixed by Josh Wilbur (LAMB OF GOD, GOJIRA, MEGADETH). Mastering duties were handled by Ted Jensen (PANTERA, DEFTONES, BRING ME THE HORIZON).

Less than two weeks after their release, the two new videos from album six had already amassed close to half a million views on YouTube. The diehard SUICIDE SILENCE faithful who helped put "You Only Live Once" close to 100 million views have not wavered, maintaining fierce devotion.

As evidenced defiantly and definitively on Become the Hunter, the best art summons its strength from authentic life experiences. Many bands pay lip service to the idea of overcoming the odd, but few live it as triumphantly as SUICIDE SILENCE.