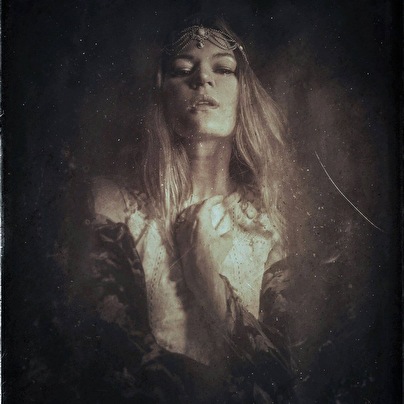 Mimi's musical journey started at the age of 5 when she began composing instrumental piano pieces, which she then performed at her elementary school's talent assemblies. At the age of 8, she won 1st place in the National Parent Teachers Association's, "Reflection's Contest" for one of her original piano compositions, later featured in local news publications. At age 16, Mimi attended Hamilton High School's music academy in Los Angeles. While her initial intention was to focus on piano composition, she found herself gravitating towards the school's newly launched Electronic Music program. It was here that she learned how to not only create new sounds, but how to record and produce her instrumental music. The program also introduced Mimi to a new instrument she didn't know she had at her disposal – her own voice. After experimenting with reverb and delay, Mimi learned how to properly layer multiple vocal harmonies and create what has ultimately become her unique sound: A gentle choir, otherworldly and peaceful, and the perfect compliment to the instrumental music she'd been creating for years.

Mimi's original solo albums and soundtracks have been in consistent rotation on Internet and satellite radio stations around the world and her presence as a vocalist and composer for film, TV, and video games has continued to grow. Mimi's music has been featured on Travel Channel's "Ghost Adventures", Fox's "So You Think You Can Dance", and NBC's "America's Got Talent" to name a few. As a composer, she's provided original scores for documentary features "The Demon House" and "The Trade" along with numerous short films. Mimi's released an original score and soundtrack for the space strategy game series Ancient Frontier, and is anticipating the release of her work on two new video games later this year (She Dreams Elsewhere and The Lighthouse). As a vocalist, Mimi's collaborated with Emmy Award Winning composer Inon Zur on video game soundtracks "Dungeons & Dragons: Sword Coast Legends", Ubisoft's "Eagle Flight", and Bethesda's "Fallout 4: Far Harbor".

The Electronic Music community has also embraced Mimi's sound and ethereal vocals and, to date, she has collaborated with over 30 artists in the genre, including Bassnectar, Delerium, Conjure One, Seven Lions and Illenium. One of Mimi's most notable collaborations is the piano-driven anthem, "Butterfly", co-written with Bassnectar. To date, the track has earned millions of digital streams on multiple platforms, terrestrial and satellite radio play, and several television and film placements. In addition, Mimi has joined Bassnectar on stage for live performances of their songs at Nashville's Bridgestone Arena and Denver's Red Rocks Amphitheater.

Mimi is thrilled to have partnered with virtual instrument developer Soundiron and release her own ethereal vocal and ambient sound library: "Mimi Page Light and Shadow". After years of utilizing her voice as an instrument within her own work, Mimi was inspired to create a virtual instrument that anyone could potentially work with. Her original concept of "Light and Shadow" began with her desire to express the creative range within her own art, and, on a larger scale, the emotional range we all possess as human beings. While her breathy, ethereal tone can be used to create serene and angelic sounds, with the right manipulation it can also become haunting, melancholy, and even scary. In addition to the thousands of vocal samples and phrases in the "Light and Shadow" library, Mimi's created dozens of ambient pads and drones, all hand-crafted from her own voice. Utilizing time-stretching, manipulation, and heavy processing, each ambient drone is a compliment to the overall otherworldly aesthetic of the library. While retaining her unique sound and signature ethereal quality, the versatility of the library gives the user the ability to add depth and diversity to every genre of music, whether it be Electronic Music, Fantasy/Sci-Fi, Horror, New Age, Classical, Ambient, or Hip Hop. Whatever the project, "Light and Shadow's" sounds have the potential to bring life, depth, and a bit of magic to the final product.

In addition to her professional career, Mimi's extremely passionate about sharing her knowledge through music education. Mimi has been a featured mentor for Warren Huart's award winning online series, Produce Like a Pro, and she is currently working with UCLA and the ADIDAS Sound Lab as a mentor and artist development coach for Los Angeles high-school students. Mimi's goal as an artist is to inspire people to nurture their own unique voices and to use music as an outlet and tool for communication and self-expression. She believes that music is our universal language and has a profound ability to help heal and unify our world.