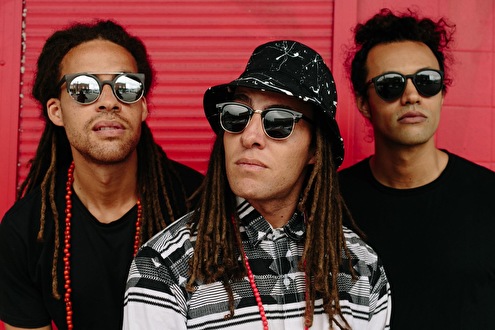 Drawing from their African heritage and raised in the cultural migrant melting pot of Australia their sound takes influence in equal parts from Fela Kuti, Hugh Masekela and The Daptone Horns as it does from Outkast, Fat Freddy's Drop and Rudimental.
→ lees meer
True Vibenation combine an irresistible blend of soul and afrobeat backed by big bass, big beats and live horns.

Drawing from their African heritage and raised in the cultural migrant melting pot of Australia their sound takes influence in equal parts from Fela Kuti, Hugh Masekela and The Daptone Horns as it does from Outkast, Fat Freddy's Drop and Rudimental.

Made up of multi-instrumentalists Vuli, Moody and Klue the trio has
developed a reputation for an electric live show, which includes all three artists producing beats and playing horns live on stage, taking them to some of the worlds finest festivals including: Glastonbury Festival

True Vibenation has been picking up some serious steam in 2018, with tours to Africa, Europe and a massive 12-date Australian tour. In between runs the band hit the studio, recording their new EP and writing, scoring and shooting its accompanying short film, featuring afro dancers Thuba and Pepsie.

Their latest single 'Squat' featuring Haiku Hands was added to rotation on Triple J, and community across Australia as well as supported by influential tastemaker blogs such as NME, Pile Rats and Purple Sneakers. While previous song 'The World Is Ours' peaked at #1 on Spotify's viral chart for the UK and #4 globally and was supported by international blogs Afropunk, Indieshuffle and Acid Stag.

2019 is shaping up to be an even bigger year with the release of their new EP and short film as well as return tours to Europe and Australia.

"Their sound seamlessly blends electronic music with the raw energy of a live band. Their eclectic sound and magnetic stage presence, coupled with a collective inability to stand still at any given moment, created an infectious energy that got the 2,000-strong crowd, as the old stupid cliché goes, to dance like no-one was watching." Scenestr, Australia

"The enthusiastic Afro-Australian trio prides themselves of on DIY process that enables them to fuse an array of soundscapes inspired by Latin beats, house music, synths, live instrumentation, and even hip-hop." Afropunk