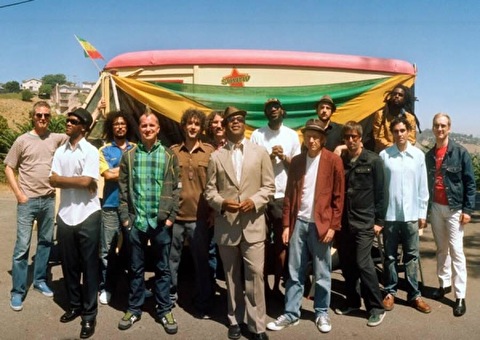 Hip-hop culture is directly based in Jamaican DJ culture and Los Angeles' THE LIONS formed with both the roots and the branches in mind. The guys have done their homework too...collectively THE LIONS have backed up or sung with Dennis Alcapone, De La Soul, The Ethiopians, Big Daddy Kane, Alton Ellis, The Heptones, Brand Nubian, Hollie Cook, Barrington Levy, Macy Gray, Hepcat, The Maytones, The Pharcyde, Wailing Souls, Stranger Cole, Ziggy Marley and more. Again, roots and branches, digging deep.

Jamaican musicians and sound system DJ's were inspired and influenced by American Soul music and then years later early hip-hop pioneers like Kool Herc and Bambaataa couldn't have done what they did without the JA model. These days most all the music coming from Jamaica is grounded in hip-hop. Back and forth, forth and back. When the people are dancing and the the groove is tight though, call it what you want, it's really all just soul music.

Since their inception in 2007 THE LIONS have pulled funky ideas from Jamaica, North and South America and Africa and Brazil to create their unique sound all the while thinking like hip-hop producers sampling records for a track. Bits from here, bits from there but all sewn together under strict quality control. The hooks are strong, the instruments are real and the singers can actually sing.

THE LIONS are not a retro act though, don't get that twisted. THE LIONS are part of a long, proud lineage of musicians exploring their roots and then branching out to create their own sound.