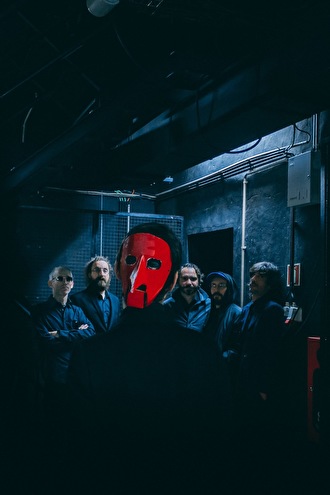 Beheaded Totem, the second album by the enigmatic Portuguese ensemble HHY & The Macumbas, leads us straight into the damp caves of our minds. Their 2014 debut Throat Permission Cut was described as "a massive synapses bombardment in a short circuit between Glenn Branca and Adrian Sherwood," and yes: HHY & The Macumbas have continued their march into the undiscover'd countries of psychoacoustics. Febrile, haunting and at times overwhelming, Beheaded Totem is nothing short of a dream for the necro-tourist. Cerebral and alluring. Toxic. Welcome to the four-dimensional meltdown.

"Beheaded Totem continues a long investigation into percussion, circular rhythms, dub strategies, and horns coming from the alcohol-fuelled Portuguese marching bands," says constructor and conductor in the world of HHY & The Macumbas, Jonathan Uliel Saldanha. For those not familiar with the Macumbas, they are a shifting musical entity. Built amid smoke and fiery red lights, the performers on Beheaded Totem are: João Pais, Filipe Silva, Frankão and Brendan Hemsworth on percussion, and Álvaro Almeida, André Rocha and Rui Fernandes on horns. An Arkestra reaching not for the stars but the boiling core under our feet.

This music stems from a deep connection with the streets of Porto and its undertones, nights and drags," Saldanha says. Emerging from SOOPA, an art and music production unit based in the old harbour city, he has been a leading force in the Portuguese experimental music scene since the early 2000s, through which he coined a signature "skull-cave echo."
"It comes with a love for trance, otherness and sound pressure," he explains. Beheaded Totem is indeed a pulsating and physical album, revealing both an ultimate pain and unbearable joy – a funereal ecstasy – as if everything might collapse in on itself at any moment. The disruptive nature of the seven tracks also hints at a free form. They are more evocations than songs, found in the depths Saldanha reached for in the filmic and musical explorations of Tunnel Vision(2016), made alongside director and musician Raz Mesinai. Recorded in tunnels and cavities in and around the city of Porto, the sub-frequencies of Tunnel Vision functioned as a panoramic documentation of the underground, a "dub fiction," as Mesinai put it. Add the Macumbas' already famed live capacities evoked on this album, and Beheaded Totem comes across as a fear- less interpretation of sulphurous storms. Both meticulous and massive, raw and ravishing, as if their minds are set on rewilding a hollow earth.

And as the nightly creatures prepare themselves to join HHY & The Macumbas in a final Danse Macabre, they might realize what they're in for: to never find their way back to the corrosions of daylight. But, then again, some sacrifices come with joy.