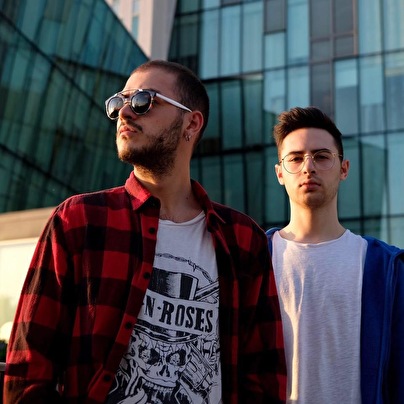 Fulvio and Raffo aka Widemode are a producers/djs duo from Milan, Italy.
After a few years playing acoustic guitar, Fulvio decides to approach the world of electronic music production and djing, being able to play in some of Milan's most famous clubs.
Raffo is not far behind, at the age of 7 he starts playing the piano and once he turns 16 he become resident dj of Toqueville 13 in Milan, also playing in many other famous clubs around Italy.
Thanks to a common musical project that allow them to meet each other and cooperating on some productions, they realize they have a special feeling, deciding to start a new journey as Widemode.
They released music on labels like the iconic Revealed Recordings, Sony Music, Ministry of Sound and 2Dutch; receiving the support from well known names in this industry, such as the legendary Tiësto, Hardwell, Lucas & Steve, Sam Feldt, Marnik, Brooks and many more.
In summer 2018 they were able to perform in some of the world's most famous clubs like Noa Beach Club, Aquarius Club and Kalypso in Croatia.
Please take your seat and fasten your seatbelt, the best is yet to come.