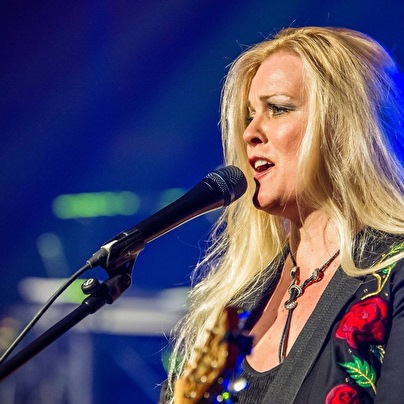 Since childhood, Pam also held singing, making music, and entertaining dear to her heart. She often spent her weekends singing at The Jeffersonian Bluegrass Barn and Gus Fletcher's, a local music hall. It was here that she began performing the songs of her country music heroes Dolly Parton, Emmylou Harris, Loretta Lynn, Tammy Wynette, and Hank Williams. But no matter how late she stayed up with the crowd, Pam was always up singing for Sunday morning praise and worship at the Bethany United Methodist Church.

Then, one day like a dream come true, Pam got a phone call from an Opryland USA talent coordinator that changed her career forever. Her old Chevy was quickly packed headed for Nashville. It wasn't long before she began singing and working with country legends like Minnie Pearl, Brenda Lee and Roy Acuff at the home of the Grand Ole Opry.

As Pam became known around Nashville, the phone continued ringing. A call came in from Marty Stuart who had a new song ("Hillbilly Rock") and he wanted Pam to "do her thing" in the music video. After the release of the video, the demand for Pam's talent hit new heights. She went on to put her mark on some of country's most famous music videos, The Nashville Network's TV Shows, CMA Awards show, and numerous TV Specials with the likes of Jerry Lee Lewis, Steve Earle, Merle Haggard, Vince Gill, Pam Tillis and Lonestar. Pam also sang and appeared in a Wrangler Jean's commercial and a NFL Hank Williams, Jr. commercial.

It was Pam's recognizable talent, energy, and unique style that kept her on the road with top acts like Pam Tillis, Confederate Railroad, talk show host Jerry Springer, and Molly Hatchet. In 2000, Pam recorded a CD with talented Nashville songwriter, Rex Elwell, and their band "The DeVilles." As an independent release the album received much acclaim and the attention of such record labels as Mercury and Warner Brothers who began taking a serious interest in Pam's music.

All of a sudden, the demand for Pam's talents went worldwide when a European promoter booked her for a four month tour. Never to turn anything down, Pam was now juggling two Continents, two entertainment markets, and two hot new CDs – "Cowgirl State Of Mind" and "Forever One Day At A Time." When her song "You Can't Hurt Me Anymore" was released in Europe it quickly ran up the European country music charts.

Pam actually picked up the pace. In the U.S., she continued performing shows at The Grand Ole Opry Plaza with Billy Joe Shaver, The Nashville Palace, and Robert's Western World. She also performed shows for GMC Trucks, and worked on an animated film for Disney. In Europe, Pam performed shows in Germany, Belgium, Lithuania, Lanzarote, Malta, and Disney-Paris.

In 2005, Pam's fast paced life came to an abrupt reconciliation. While on the way to an evening show in Nashville, she was hit head on by a drunk driver. Such a traumatic event made Pam look at life differently – deciding to focus more on family and take things slower during her recovery, or at least what seemed slow to her. Although, producing a new CD and a new baby boy is not exactly what some people would call slowing down, but that's Pam's style.

Pam's latest album, A Part Of Me, recorded in Nashville, Tennessee, and co-produced with Andy Most and Rex Elwell, is what Pam says about all her music, "it really is a part of me!" Direct from her heart and soul, the songs are sewn together with the thread of Pam's life experiences from Yesterday's Memories, and Second Chance, to the touching title cut A Part Of Me. Supporting Pam's vocal performance are some of Nashville's best musicians such as singer/songwriter Rex Elwell, Greg Jennings of Restless Heart, fiddle great Aubrey Haynie and Mike Johnson on steel guitar. Considered to be one of her most introspective albums, "A Part Of Me" has been well received by radio in both America and Europe.

2010 and 2011 marked new inroads into the European market as the headlining act at the International Country Music Fest in Zurich, Switzerland, performing with the likes of Lonestar, The Bellamy Brothers, Holly Williams, and singing live duets with Dale Watson.

Pam continues touring Europe with regular shows in Germany, Sweden, and The Netherlands, and writing & recording in Nashville for a new CD release. As far as Pam sees it, "Red Dirt Georgia blood still runs thru my veins, and I will always be country no matter where I'm at in the world!"