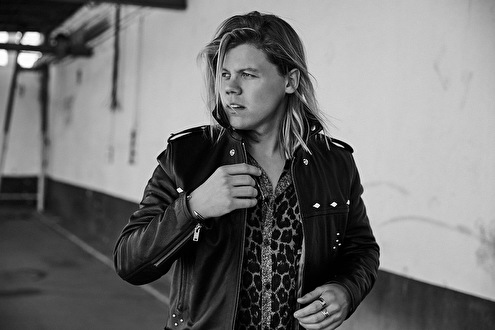 He also developed the confidence to have faith in performances that were more spontaneous and natural. "Capturing moments is an important thing with me, not just singing the record 60 times and trying to make it bigger and more perfect," he says. "Some of the tracks on this album are one take—"Start Again" is the demo vocal that I sang once, and it sort of defined me, like 'I need to be singing soulful music like this!'
Those moments are so key for me as an artist." Conrad points to the classic pop sensibility of "Beautiful Life" as another turning point for the album. "It has this timeless rock feel, like an Elton vibe, and when we finished that
one it was like, 'Cool, this is what it is'—it didn't sound hip or trendy, it just felt right." The anthemic "Hold Me Up" emerged out of a late-night, free-form session in the studio. "I've
been doing this thing lately where I set up a mic live, put on some reverb so I feel like
I'm singing in front of people, put on a track and just flow a melody over it," he says. "It's
been hard for me to get up-tempo songs, because I love nothing more than sitting at the piano and melting your heart—that's definitely what I'll tend to do in a writing situation. So when that one came, it was just a fun track that you can dance, drive, sing to, and we can worry about the serious stuff later."The album is coming out, of course, on the heels of the staggering success of "Firestone," which served as an ideal way to introduce Conrad's name and voice to the world. "We were looking for hip-hop or dance features, so I wrote something in the vein of Swedish House Mafia,' he says. "I thought 'Firestone' was a great title for a song, it sounded epic. Kygo heard it and loved it, and he sent back a first draft with that amazing keyboard line. It wasn't what I was expecting—I was thinking it would be a big EDM thing—but after a couple of listens, I loved it." Millions of listeners around the world agree, and the pre-release buzz has only gotten louder since Conrad's initial, triumphant showcase performances. It's been a long ride
for a debut artist, but everything seems to be lining up perfectly for his arrival.
"I'm putting this record out at the right time for me," says Conrad. "When I decided to do a solo record, that was exactly the time that I was having all these thoughts of 'What do I want to say, what do I want the music to mean to people?' With my band, I never thought about that. I loved singing and being around my mates, and I didn't think so seriously about it, whereas now, with my name on the cover, it's more important to sing
about stuff that I feel and have it be real.""I wasn't ready to do this three years ago. But now I'm ready to come in and be myself."