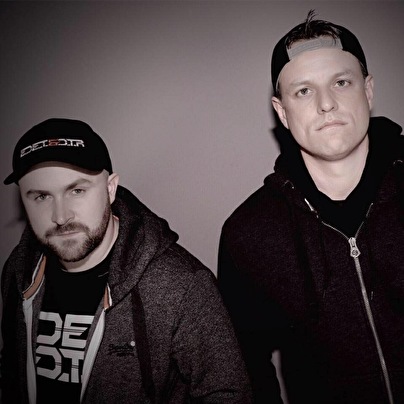 The affectionately and deservedly named dynamic duo of reverse bass hardstyle Ed E.T & D.T.R have had an outstanding run of tearing up quite possibly every single dance floor worth its salt since their mutual merging of talents in 2006. Quickly becoming the fine purveyors of speaker blasting, dance floor destroying and roof raising, full throttle back to back DJ performances, coming armed with a fully stocked armoury of crowd pleasing weapons, comprising a set choc full of their own high energy productions; the two have become seasoned at taking pride of place high atop the line up of many very well attended events for over a decade and show no signs of letting up yet.

However, not just contented with a DJ union that would turn heads; the two have accomplished a considerable amount of production since their combining of creative forces. Their discography already boasts an impressive plethora of releases, having attained over 18 No.1 hardstyle chart positions globally on such well reputed hardstyle outlets such as DJ's United Records, RVRS Bass, Bionic Digital, Ourstyle recordings, Nu Reverse Recordings, Deception Digital, Nutty Trance, D-Day Recordings, Compulzion UK and many more Ed E.T & D.T.R bring a unique edge to their take on hardstyle which has seen their records supported by international headliners the World over.

In 2015 The boys were signed to DJ's United Records one of the longest running hardstyle record labels which showcased their work to the Global hardstyle audience, then more recently in 2017 they got snapped up by Loverloud Records a brand new label run by the Italian hardstyle maestro Francesco Zeta. The pair have had quite the whirlwind journey the last few years with their work reaching incredible new heights they had only previously dreamed of.

Currently this very inspiring combo of production and performance greatness are focussed on a whole new of genre bending selection of hardstyle bangers in the studio, with the majority of their work now being released on DJ's United Records and Loverloud records and with them both being signed to Vision Artist agency for future bookings, of which there are many, the sky really is the limit for these UK hardstyle heroes.