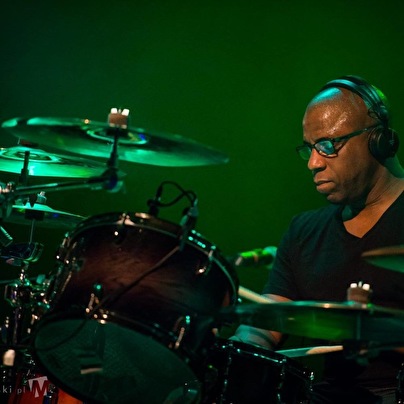 Drummer of the legendary British disco/funk band Jamiroquai Derrick Mckenzie was born a few years ago in London, UK. He started playing drums at the age of 6 and he was always into rhythm, time and music. He picked up his first sticks (which was a pair of wooden coat hangers) and started to drum on the floor of the living room, pots, pans and pillows.

He joined his first band at the age of 14 which was a reagge band called Pure'n'Simple.After few years he joined a jazz/funk outfit called Tranzeyance which influenced him in a major way. After few years of doing session work he joined a dance/pop band called Candyland. After that he started to drum for Acid Jazz Label artist Urban Species. He always stayed open for various music genres which led him to do an audition for soon-to-be one of the most musically influential and popular British band Jamiroquai. He has been with the band since 1994 and recorded many succesful albums like Space Cowboy, Travelling Without Moving, Synkronized, Funk Odyssey, Rock Dust Light Star to name a few.

Derrick is a Grammy Award winner from 1998. Together with the band they won an award for one of their best know tracks "Virtual Insanity". Jamiroquai have sold more than 40 million albums worldwide and also won four awards at the 1997 MTV Video Music Awards. They won Ivor Novello award for best songwriting and composing.