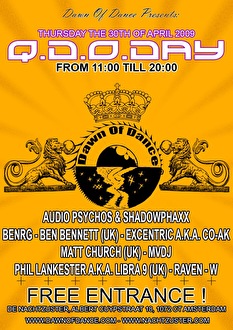 Bring on the noise

Flyers made by Cell

When launched, Coca-Cola's two key ingredients were cocaine (benzoylmethyl ecgonine) and caffeine. The cocaine was derived from the coca leaf and the caffeine from kola nut, leading to the name Coca-Cola (the "K" in Kola was replaced with a "C" for marketing purposes).

Pemberton called for five ounces of coca leaf per gallon of syrup, a significant dose; in 1891, Candler claimed his formula (altered extensively from Pemberton's original) contained only a tenth of this amount. Coca-Cola did once contain an estimated nine milligrams of cocaine per glass, but in 1903 it was removed. Coca-Cola still contains coca flavoring.

After 1904, instead of using fresh leaves, Coca-Cola started using "spent" leaves—the leftovers of the cocaine-extraction process with cocaine trace levels left over at a molecular level. To this day, Coca-Cola uses as an ingredient a cocaine-free coca leaf extract prepared at a Stepan Company plant in Maywood, New Jersey.

In the United States, Stepan Company is the only manufacturing plant authorized by the Federal Government to import and process the coca plant. Stepan laboratory in Maywood, New Jersey is the nation's only legal commercial importer of coca leaves, which it obtains mainly from Peru and, to a lesser extent, Bolivia. Stepan Company buys about 100 metric tons of dried Peruvian coca leaves each year.

Kola nuts act as a flavoring in Coca-Cola, but they are also the beverage's source of caffeine. In Britain, for example, the ingredient label states "Flavourings (Including Caffeine)." Kola nuts contain about 2 to 3.5 percent caffeine, are of bitter flavor and are commonly used in cola soft drinks. In 1911 The U.S. government initiated United States v. Forty Barrels and Twenty Kegs of Coca-Cola, hoping to force Coca-Cola to remove caffeine from its formula. The case was decided in favor of Coca-Cola. Subsequently, in 1912 the U.S. Pure Food and Drug Act was amended, adding caffeine to the list of "habit-forming" and "deleterious" substances which must be listed on a product's label.

Coca-Cola contains 34 mg of caffeine per 12 fluid ounces, while Diet Coke Caffeine-Free contains 0 mg. Caffeine may be used by athletes, as an ergogenic aid, to increase the capacity for mental or physical labor. The ergogenic qualities of caffeine are contested, although there is strong evidence that it may significantly enhance endurance. For this reason, caffeine is listed as a restricted substance by the International Olympic Committee (IOC). Nevertheless, Coca-Cola was the leading sponsor of the 1996 summer Olympic games.

All flyers made by Cell

is dit indoor of outdoor.­