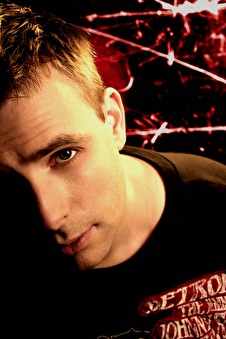 BK, finally, an official artist album. I can't remember many artists from 'our' scene doing an album like this, how long have you been walking around with the idea to do so?
Ever since I finished the Klub Kollaboration CD a few years back. I love producing but the DJing just took over and it was hard to find time to commit to a big project like this. Eventually I had to make time and take time away from concentrating on the DJing and get on with it.

You left your oldschool hardhouse style a while ago to create more different styles of music, but nowadays I can hear the influence of your old records coming back slightly in your newest tracks. Have you finally found what you were looking for? Or are you still searching for the ultimate track, the ultimate sample or just the ultimate satisfaction by creating the perfect track?
I never lost my old hard house style, but as a producer you like to explore different sounds. My heart is always in the harder material but you can learn so many production tricks by doing other music. You can then incorporate it into what you’re known for and move forward with your sound. I always looked at harddance as a style that should lead and evolve with time. I just make the music I love. As far as the perfect track I don’t think any producer achieves that for themselves, I will always listen to something I’ve done and think I can do better next time. That’s what keeps you interested.

You have done numerous tracks with at least 25 different artists. Do you find it hard to collaborate with someone else in the studio? Or do you prefer being on your own, creating exactly what you have in mind? Are some people easier for you to work with or do all collaborations work out the same way?
Usually I work with people who are colleagues but also mates of mine, so we are mostly on the same tip and it’s always good fun. Sometimes it’s great to have ideas to bounce of people. Working on your own gives you a bit more freedom but sitting in a room on your own is not as fun as dancing around the room with a mate, it just makes it more fun. All the people I work with are great to work with but as with anything: some tunes work, some don’t. Luckily music is subjective so some man’s shit is another man’s gold.

The album is called 'Under The Influence', where does the title come from? What can you tell us about the album? Is this a milestone in your carreer? Will some of the new tracks be out on vinyl later? If so, will they all be out on Riot! or will other labels support your tracks as well?
We were listening to an old Phantasy tune in the studio while I was working on the album. The tune used ‘under the influence’ as a sample and that was that, it fitted the album well because I have been influenced by different styles of music and of course by the DJs I worked with (I’ve also been under the influence my self a few times). It’s out on May 7th and the album is a two cd project. Disk one exists of twelve new tracks, some solo and some collaborations with people like Judge Jules, Lisa Lashes, Vinylgroover, Nick Sentience as well as solo tracks. It’s a bit of a tough musicjourney and covers different hard genres. Cd two is a recording of my live show at the Polysexual Arena at Global Gathering. It’s the full live experience and is basically a BK history of all my biggest tunes cut and remixed live in front of seven thousand screaming and dancing nutters, using all the technology I could get my hands on.

You played an absolute blinding set at the Hard Dance Awards ceremony last February, where you were voted Best Producer and where your track Systematic was voted Best Track Of 2006. What reactions did you get after your set? And what does it mean for you personally to receive two awards in very important categories?
I really enjoyed playing there as it’s a great party to do. I played a mixture of stuff from the album with a few classic harddance tunes thrown in the mix to celebrate the night. The reactions after the set were great and I was looking forward to joining the party. Winning the award is great as it’s the fourth year in a row that I have won the best producer award. It was great to win best track with ‘Systematic’ because it was a tune designed for me to play at my international gigs so it shows the harddance is still doing it all over the place.

On the seventh of April you will perform at Hard House in Club Latido, next to Fausto, Danny D, MC Da Silva and PC Lexus. What can we expect? Will it be one of your live sets or will you do a 'regular' DJ set?
I’m DJ-ing there and will be playing a lot of the new material as well as some of the classics of the album. There is some great music around at the moment as well so prepare for some banging stuff, I can guarantee you that. I’m really looking forward to it, also Mix Mag are coming to cover the party as well, so the Dutch scene is getting some worldwide exposure, which is good because you guys still rock in that beautiful place called The Dam!

In Holland you have quite a big group of fans, is there anything you would like to say to the Dutch harddance lovers?
Yeah! I’d like to see you all on the seventh of April so we can party hard and thanks for all the support you guys give me, it means a lot.


Last but not least: my choise list. Choose one out of two options:

McDonalds or BK (sorry for the word joke, couldnt resist)? McDonald's
CD or vinyl? CD
Football or cricket? Football
Live or DJ set? Mmm DJ I think, though that’s a tough one.
Email or SMS? Email
Outgoing or shy? Both
Nirvana or Massive Attack? Massive attack
Revolution or Bad Ass? Hmmm I would have to say Revolution.
Car or public transport? Car
And the usual final question: music or women? How about women while listening to music

Riot!
Ben Keen is the man