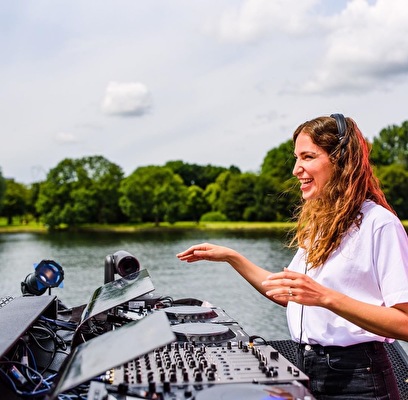 La Fleur actually started her working life as a pharmacist – but despite her acute understanding of laboratories, her passion was for an altogether different kind of mixing. 'My choice of career…. Well, it came to a point where I had to choose…. and I like the way it's turned out!" It was an active choice to make music, and La Fleur chose with her heart - and her feet. Her first residencies were at Sunday Secrets at Berns in Stockholm and a second key place was an infamous spot called Grodan Cocktail Club. "I was playing a bit more soulful house and US garage back then," she smiles. What she really learned was inner confidence - and that practise makes perfect.

With a slew of cutting-edge club productions under her belt garnering praise and attention from producers like Ian Pooley and clubs like Watergate and Panorama Bar alike, La Fleur's sound is simultaneously house and techno, classic and futuristic alike. She knows how to speak to a crowd and – just as importantly – she knows how to make them move. Indeed, her recent three-hour set at Panorama Bar is testament to her technical and musical prowess, mixing in her own productions with future-facing tracks and a sprinkling of classics. 'I really love to dance and when I discovered dance music, there was a real connection. In general, the people who inspire me are devoted to the things they do. Artists need to make me feel something. Music-wise, I like tracks that tell a story."

La Fleur closing her three-hour P Bar with the chiming, winding melody of 'Flowerhead' – mainly because so many people came up and asked her to play it! – is a reminder that her record sleeves and image are an important part of her outlook. Indeed, all Power Plant releases come with unique sleeve art – with the Eavesdropper EP coming with an sketched side portrait with ears even bigger than DJ Harvey's disco earlobes! 'The visual side is very important to me. When I'm thinking about a track to sign or to release, the artwork needs to match the music and vice versa." La Fleur has worked with Olaf Hajek based in Berlin, as well as Sweden's most famous illustrator Hans Arnold, who drew the distinctive 'Eavesdropper' artwork and returns to the fray with incredible and suitably furry artwork from Hans Arnold for the forthcoming 'Feline' release.

Of course, none of La Fleur's success came overnight. As well as playing shows as varied as Watergate, Zoo Project in Ibiza and P Diddy's after-hours in Miami in 2010, she also has a residency at Watergate to attend to. But for three years, La Fleur hosted the electronic dance music show 'P3 Dans', on Swedish National Radio, but once that specialist stint came to an end, she already had her next move planned out – 'I moved to Berlin to get inspiration and to make time for my new productions". Building on the success of the Flowerhead EP, Eavesdropper and Flowerhead Revisited, 2012 marked a new chapter for La Fleur as she moved ever closer to her innermost musical ambitions. Remixes for Adana Twins (Strange – La Fleur Remix) and Magit Cacoon (ShowUp ShowDown – La Fleur Remix) consolidated her position as a go-to remixer. La Fleur was also nominated for "Årets Dans by P3 Guld for Dance Music Of the Year. 'I was very happy and honoured to be nominated," she says

With her recent club cut 'Slingan' already a firm favourite for Kerri Chandler and a slew of new tracks soon to come – including that incoming deft house cut 'Feline', La Fleur is blossoming like never before. Indeed, her current 'Nightflow' EP has caught the ears of Carl Craig, Claude VonStroke and Mixmag alike, resulting in a sold-out vinyl release and more buzz about her unique brand of music than ever before. And with his Drama mix, Detroit legend Kenny Larkin also delivered his best remix since Inner City's 'Future', a deft, dark dance-floor take on the smart original that clocks in at fifteen minutes and was played at pretty much every Ibiza underground closing party of note.

Last but not least, Sanna also has a hot new residency at Watergate up and running. "I've been playing Wednesday nights - there are more locals and I like that. I play the Water Floor, which is really cool. Playing there allows musical freedom. La Fleur clearly wants a long life in music. 'I don't know what I would do without music," she muses. And what of her original choice of office environment, wearing a lab coat? 'I can't see myself working as a pharmacist again – maybe when I'm 60!" We doubt that dance music will let her go.