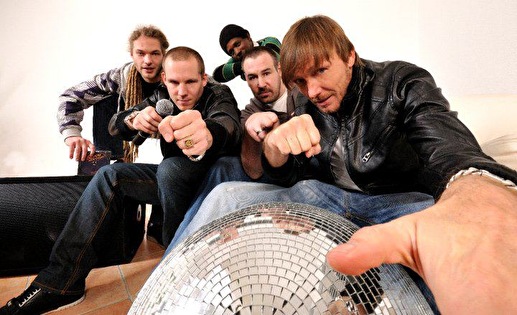 Another big influence was Englands very own "David Rodigan" who was soon invited by thy now called "Pow Pow Movement" including another selector Mr. Brown. People started to follow Pow Pow Movement, and numerous parties made them well known in the country. After playing their sound illegally on some festivals, the promoters figured the soundsystem culture was getting popular, and soon Pow Pow was invited to several festivals and concerts. As a result of some fines they had to pay for holding illegal dances, Pow Pow Movement looked for a club to play which was unusual back then. In 1995 Pow Pow started playing every Friday very successfully in their homebase Petit Prince club, which is still "the" dancehallclub on Friday nights. You will find first class dancehall events there, with guestsounds like Stone Love, Bodyguard, David Rodigan, Saxon, Tony Matterhorn etc. playing alongside Germany's finest throughout the year, aswell as people from different cultures and nationalities jamming together.

In 1995 "Devon" joined the crew as MC. Devon is a Jamaican who has been living in Cologne for ten years now. In 1996 Pow Pow got on the radio with their own show "Pow Pow Reggae Radio". The rest is history, Pow Pow played their sound on every spot and festival throughout Europe, in places like Italy, Switzerland, France, Netherlands, England etc. as well as international places like Jamaica, U.S.A. , Africa or Canada. Numerous dubplates specials got voiced whenever there was a possibility on their trips to Jamaica, the U.S. or England. Pow Pow Movement truly set a foundation in Dancehall in Germany (Europe) along with some others, playing their own, very unique style. Many young sounds still follow the movement into the next millenium, and make Dancehall music in Europe what it is today. It's the love for this wonderful music from Jamaica which has brought Pow Pow where they are today.

As a result of being one of Europe's top class soundsystems Pow Pow Movement entered worldclash 2000 in New York, as Europe's first intercontinental sound ever for such an event. Although they failed to win, Pow Pow Movement gained worldwide recognition, and is still a sound to watch out for in the future.

In 2001 Pow Pow Movement started producing their own tunes on their own Pow Pow Productions record label. Their first bombastic riddim came out 2002 was called Celebrate which features artists like Beenieman, Turbulence, General Degree and Gentleman and many more. After they won the euroclash in 2002, the label released another riddim in 2003. The legendary shanty town riddim with artists like Sizzla, Luciano or Tanya Stephens was a worldwide success in the dancehalls and is still a riddim you can hear nowadays.

Jamaica 2004, the biggest Reggae radio station IRIE FM plays the new Pow Pow Riddim "Blaze" on heavy rotation. The riddim is taking jamaica by storm, and the big tune from the "artist of the year" Richie Spice "blood again" is on the No. 1 position for weeks on the reggae charts in Jamaica, New York, Europe and Japan. Also Chuck Fender's "cry for my people" and Junior Kelly's "blaze" are mashing up the dancehalls all over the globe.
The next production "superior" is another sureshot. Gentleman's first single of the platinum selling album "confidence" goes straight on the No. 1 position of the german popcharts. The song "superior" becomes one of the most played songs on radio. Produced by Ingo Rheinbay (producer of the year 2004/2005 riddim magazin) the selcection gets high international ratings again with songs from Morgan Heritage, Anthony B or Sizzla, just to mention a few.

Pow Pow Movement, now joined by another dynamic MC "Jr. Carl" gets rated as germany's best soundsystem of the year in 2003/2004 and 2005 at riddim magazin. More songs got released in 2k5 on the "gladiator" riddim with jamaica's top notch artist Bounty Killer (gehtto gladiator), T.O.K., Daville or germany's band "seeed", who also featured the song on their platinum selling album "Next". One year later it was time for roots music again with the first sight riddim. Big tunes by Turbulence, Chezidek or Fantan Mojah, who already start work with Pow Pow in 2002 before he got well known in the reggae business.