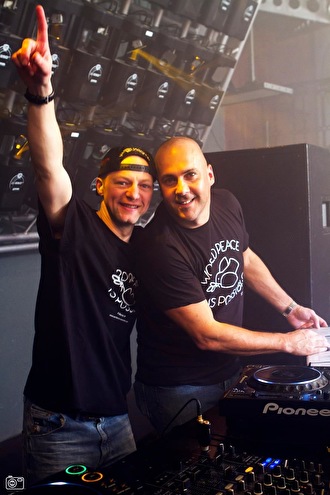 Ramon & Theo met one another at a party called 'Mallorca-reunion' in Utrecht, NL as both had played parties on the Spanish island of Mallorca. Individually the two had already established themselves in the underground gabber scene as producers & djs. As a solo artist Ramon already had successful releases on his then fledgling independent label Master Maximum Records. Theo had been building up his name & reputation as a skilled dj having played frequently at several major raves such as "Euro Rave" and "Dance to Eden." They decided to join forces and work together forming the duo of Charly Lownoise & Mental Theo. The dj/production team gained popularity in the underground hardcore-gabber scene with releases such as 'Blast EP', 'DJ Fuck', 'The Ultimate Sextrack', 'Tiroler Kaboemsch' and 'Riot In New York' on Ramon's Master Maximum Records. Their "Speedcity Tour" helped them further capitalize on their immense success as producers & djs making them one of the most popular Hardcore Gabber acts in The Netherlands.

In the mid to late 90s their releases began to get them international attention with several tracks making it to the top of music charts in Holland and Germany. 'Live At London' peaked at number 38 on Dutch national music charts with an accompanying music video played on VIVA in Germany and Countdown in The Netherlands. They had tremendous success with the 1994 hit, 'Wonderfull Days,' a Happy Hardcore single which peaked at #2 in The Netherlands and garnered them a major label record deal with PolyGram in 1995.

All in total they have sold more than 3,000,000 units of their albums and singles. However by the late 1990s and early 2000s their releases began selling less and no longer reaching the top of the charts. Lackluster sales eventually led them to break up and pursue solo careers once more.

Since breaking up in 2001 they have occasionally joined forces to produce a few mixed cds and compilations. Theo currently works as a presenter on "Motorxperience" on the Dutch television network RTL5, he is a DJ for Dutch radio station Slam FM. Ramon is co-producer of Deepack, has his own recording studio called "Seashore Studio." Ramon & Theo play out regularly individually at major events, but the pair will occasionally reunite for special djing performances. In February 2019 they will celebrate their 25 years anniversary in a 2 nights sold out Ziggo Dome Amsterdam.