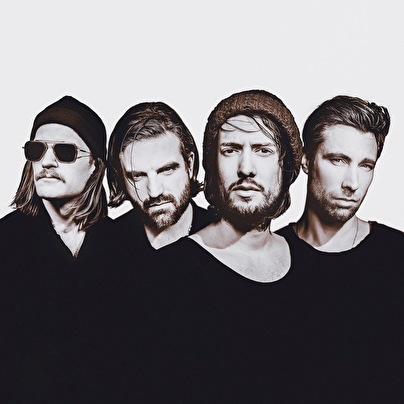 Apart from the band's name Kensington, named after similarly-titled areas in many international cities, which range from upmarket to impoverished, there has always been an international touch to Kensington. Their 2010 debut album Borders was recorded at Kaiser Chiefs' Nick ''Peanut'' Baines' studio in Leeds, while its 2012 successor Vultures was recorded in Kreuzberg, Berlin. Vultures was mixed by Cenzo Townshend - King among his peers in Britain – while American Steve Fallone (of Strokes fame) mastered both full-lengths. But let's stop the name dropping here and focus on the band itself:

Domestically, Kensington is by far the band of the moment. Their string of summer festival appearances this year is endless, topped off by a show at Holland's most craved for festival spot, namely Pinkpop's main stage at prime time in mid June. All in all they will appear at over 50 festivals this summer. Add to this the gig at Hungary's Sziget festival plus some interesting German and Austrian festivals, and it becomes clear that this band has the thickest festival agenda of the lot.

The popularity of this band is growing daily. In April they picked up three prizes at the 3FM Awards, staged by the same-named public broadcaster (Holland's equivalent to BBC Radio 1). They won the station's Serious Talent Award plus awards for Best Live Act and Best Album for Vultures. The album is chockfull of singles. So far it has spawned five radio hits: We Are The Young, Send Me Away, No Way Out, Don't Look Back and Home Again. Tune into 3FM at any given moment at daytime, and you'll hear a Kensington track. Especially Home Again has received a power play rotation at 3FM. However, this time airplay went across the board, picked up by influential commercial stations Radio 538 and Q Music as well. No other Dutch band has this mass appeal currently. Vultures is a hit album, both in the album and iTunes chart.

In January 2013 Kensington played an unequalled amount of 11 shows at the Eurosonic Noorderslag showcase festival in Groningen, the network event for European bands. It was crystal clear to international professionals that this band has some bonuses. With Eloi Youssef and Casper Starreveld they have two great singer/guitarists in the band plus a rhythm tandem – bass player Jan Haker and drummer Niles Vandenberg - that never misses a beat.

And then there was this tweet by Coldplay, who recognised the band's enormous potential. Chris Martin and his lot championed the video for Home Again to their 9.2 million Twitter followers on their official website and Twitter account. Talking about these Brits, Kensington has a similar pop sensibility with songs people can sing and whistle along with. Try to get Home Again, a massive pop tune, out of your head and you are bound to fail. Mission impossible! The song is featured in an international TV campaign by Jack Wolfskin. Kensington is a hit factory full of smashing tunes, which deserve to be heard everywhere in the world outside of Holland. Kensington's Vultures are friendly birds of prey that will brainwash your mind with great pop sense.