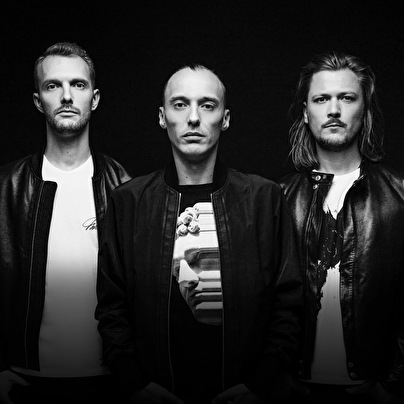 Hailing from industrial Smolensk DJ-trio made the entry in Top 100 Dj MAG in 2016 with position #27 (Highest Climber) while receiving all existing dance awards in their homeland. From their early releases to their current singles like 'Fix Me" and 'Skin&Bones" feat. Christian Burns, collaboration with Going Deeper as Spotify hit 'Far From Home" and Beatport chart-topper 'Out of Gravity" with Yves V of Tomorrowland, Swanky Tunes are showing no signs of slowing down and about to rock the industry with a 'star" collaboration with fabulous Far East Movement in spring 2016 under the label of Steve Aoki – Dim Mak.
Whether it is in the studio or on stage, or the global music charts, the SHOWLAND label owners and headliners are at the forefront of electronic dance music. With their uplifting anthemic sound, the Smolensk based music pioneers deliver dancefloor bangers to nightclubs and festivals around the globe.

Swanky Tunes are one of the most sought after remix teams in the world. Recent success include Zedd's 'Clarity", Dada Life's 'Happy Violence", and together with R3hab they transformed Sebastian Ingrosso & Alesso's 'Calling". Swanky Tunes intensified their sound with the Beatport Top 10 releases of 'Scratch" and 'We Know" a collaboration with DVBBS and Eitro. Other successful releases include the Kaskade collaboration 'No One Knows Who We Are" via Ultra Records, which was Top 10 on Beatport, 'Sending My Love" a joint effort with R3hab, and 'Make Some Noise" ft. Ben Mclnerney with Tiësto.
In addition, Swanky Tunes track 'Here We Go' was featured in the movie and soundtrack for Fast & The Furious 6. Swanky Tunes have released music on Spinnin', Axtone, Size, Doorn, Revealed, and Musical Freedom, Dim Mak, Ultra Music, Wall Recordings and Armada Music.

Last years of career are the real highlights for Russian producers: in 2014 Swanky Tunes successfully released 'Fire In Your Hearts" on Hardwell's Revealed Recordings followed up with the next release of 'Fix Me" – a collaboration with Raign on Flamingo Records / Dim Mak. 'Fix Me" reached #8 at Music Week Cool Cuts Chart

and got #4 at Russian National Airplay Overall 2014 Chart.

2015 became the productive year starting with brand new tune called 'Wherever U Go" released on SHOWLAND / Dim Mak and 'Skin&Bones" single with the vocals recorded by the voice of Armin Van Buuren and Tiesto - Christian Burns, that landed in top 20 releases of Dim Mak of all times. As result Swanky Tunes entered top 100 DJs of the planet and ended the 2015 with chart-topping collaborations with house-duo Going Deeper and melodic EDM-breakthrough producer Arston.
2016 is on its way and Swanky Tunes are looking forward to seeing you on the main dance events!
Stay Swanky – Get Swanky!