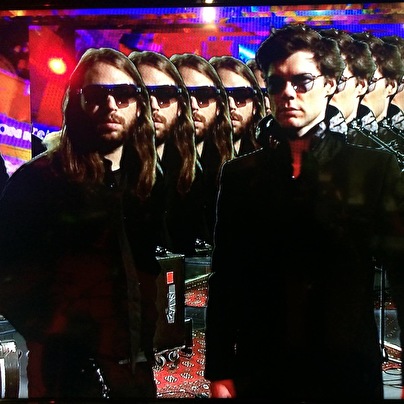 In 2012/2013, Talibam! collaborated with legendary Fluxist artist Yasunao Tone at the MoMA, completed 3 theater residencies in NYC — at the IRT Theater, the Lower Manhattan Cultural Council's Swing Space, and at the Incubator Arts Project where they presented their opera Discover Atlantass with collaborator Sam Kulik (http://bellykids.bandcamp.com/album/discover-atlantass) — released 3 albums, completed 6 European tours, collaborated with world-renowned choreographer Karole Armitage, performed at ATP by invitation from TV On The Radio, performed at the Sant'Anna Arresi Jazz Festival in Sardinia, etc.

Their 2012 release, Puff Up The Volume, was a bold attempt at rap without having ever practiced or listened to rap before (https://itunes.apple.com/us/album/puff-up-the-volume/id565932071). In 2014 they released Polyp, an improv CD about the adolescent qualities of no-wave music with Weasel Walter (http://mnoad.bandcamp.com/album/polyp). 2015 has seen the release of 4 albums and a comp track: Free World is a sound collage cassette extracted from their Launch Pad series (https://korperleib.bandcamp.com/album/free-world), Double Automatism is an electronic/noise 180gram vinyl with Yasunao Tone and Sam Kulik (http://karlrecords.bandcamp.com/album/double-automatism), Translition 2 Siriusness is an electronic/dance-ish white LP with QR code (http://talibam.bandcamp.com/album/translition-2-siriusness-side-a), The Marimba Files is a tour-only CD extracted from their Launch Pad Series — and finally Talibam! added their track Aufhebong to an Icelandic-based cassette comp (http://ladyboyrecords.bandcamp.com/album/lady-boy-records-009).

To date, Talibam! has traveled to over 40 countries, completed more than 30 international tours, and released over 40 albums.