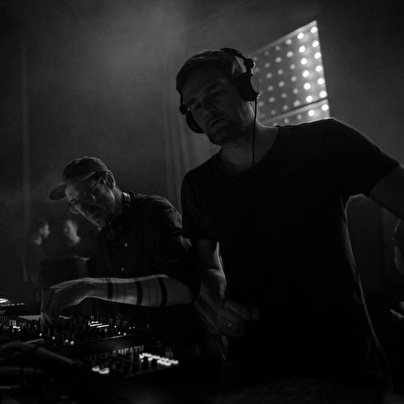 Already performing in clubs with their own solo endeavours - Nico as a live act, Christian as a DJ - the pair met back in 1998 at a party they were both booked for, and immediately struck up a rapport. "There weren't many music nerds in the region" they recall. "It was almost inevitable for us to become friends." Their musical bond deepened swiftly through regular record store pilgrimages and late nights in clubs and at festivals. Swapping music and throwing parties together, they soon made their first joint studio venture in 2000 "without really heading into a specific direction. It all began in our first shared apartment in a street called Turmstrasse." It was their record dealer who proved to be the catalyst for their production career, urging them to bring their music to the world and releasing the track Turmstrasse on his Electronic Parliament imprint in 2001. "Without him we wouldn't be where we are today. He believed in us and enabled us a lot."

Their cinematic take on 4/4 electronica has won praise from all quarters via releases on Diynamic, Connaisseur and their own Musik Gewinnt Freunde imprint. Debut album Rebellion der Träumer ('The Dreamer's Rebellion') demonstrated a prowess beyond the realms of the dancefloor, laden with frosty electronic melody, downtempo rhythm and classy vocals. A busy remix schedule has seen them grace the likes of Cocoon, Get Physical, Soma, Poker Flat, Defected, Systematic and Traum, reworking multifarious acts including Trentemøller, Hot Chip and Terry Lee Brown Jnr. along the way.

Their sense of emotion - informed by their upbringing on Germany's visually arresting Baltic Sea coast - lends their productions a human warmth, allowing them to slot effortlessly into both club and home listening scenarios. "Wide; open; top-heavy; all-consuming; shifted; simple; these are the words we use to describe our sound. We use both digital and analog. First and foremost we produce music for ourselves. We don't predetermine whether it's suited for home or club environment." This lack of contrition serves them well. Electronic music is an art for them; not a science.

Watching their live show reveals how their music connects with crowds on an emotional level, and how its melodic and textural depth works in such synergy with its rhythmic backbone. "We play live with two MacBooks running Ableton Live with over a thousand clips, which gives us a lot of space to improvise. The whole thing is controlled with one iPad each which allows us to work very fast and intuitively." Their show has been finding them in high demand across the globe, and has helped them to strengthen their relationship with Solomun's Diynamic label - playing at their international parties while releasing music with them on a regular basis. "They have been friends of ours for over ten years" says Solomun. "It was a mere matter of time for them to join in. Mutual friends, interests and in general a similar perception of music and life brought us together." While the label's sound has evolved in recent years, there has always been a place for Kollektiv Turmstrasse within their fabric. "One thing that we all have in common is a certain melancholy and harmony in our productions." For a duo who don't like to be pigeonholed, it's a perfect fit.

"The journey has alway been more important to us than the reward" Christian and Nico say on their future with music. "There is a lot to discover along the way and it might just be that the detour is the more scenic route to the next goal." With such an organic pulse running through their productions, it should come as no surprise that they hope their career progresses in similarly unforced fashion.