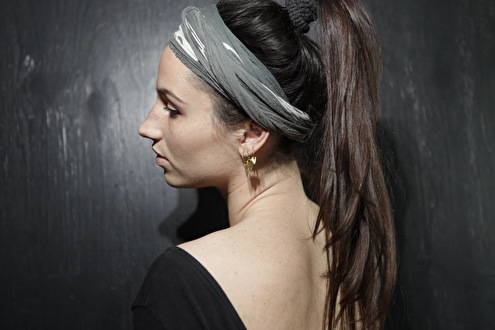 Some fifteen years ago, when she was 16 years old, Afra started buying and playing records. It was the beginning of the 2000's and Afra fell in love with the music of Miss Kittin and The Hacker, Tiga, I-F and DJ Hell and his International Deejay Gigolo Records, amongst others. She was soon playing their records to crowds at clubs and festivals around Amsterdam. But after some years the pressure and politics of dj-ing really got to her and she decided to take a hiatus. Leading up, not only to her becoming a successful jewelry designer, but also giving her time to grow and become more mature about the dj-scene. A couple of years ago Afra just couldn't get around it anymore; really missing dj-ing and digging for new vinyl to add to her collection.

So, years later, the only thing left to do was to start things up again. With the support of Is Burning, Red Light Radio and Operator Radio Afra got back into regularly playing her records for crowds other than her two cats at home. In 2018 Afra extensively enlarged her vinyl collection, mainly through her favourite record shop Clone, where she did an in-store session and played for their ADE take-over at Radio Radio as well. The months following she played at Job Jobse's release party at Rush Hour, Thuishaven, PiP, Is Burning and SPIELRAUM. At this last gig she immediately felt at home, like she found a new family. The feeling was mutual and Afra became their next resident in early 2019.

The new year is looking up for Afra anyways, when she starts her very own hosting at the upper room of the Melkweg. The bi-monthly party is named 'Illuminator', and yes, there is a UR reference there. Next to that there are some gigs in Berlin planned, another show at Thuishaven and at PiP again too. Afra's sound has a dark but danceable punch to it, mixing up the old Detroit electro and techno records, with some booty, trance, rave and new stuff in there too. Fusing different musical worlds into one solid and energetic entity.