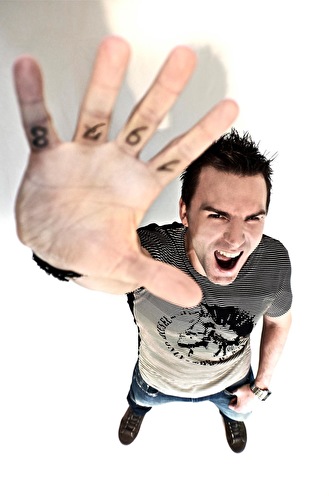 ,Italy. His career as a DJ began in the summer of 1995. Early in his career he started as a resident DJ at J&J-Orbital(Fe),Italy. For the following 5 years Manuel performed as a special guest on some major events and clubs in the north east of Italy like: Fabula, Strauss Tour, Sonar, Under Construction, Energy Club, Ecu and Fuse.
→ lees meer
DJ Activator aka Manuel Tessarollo was born in Bassano del Grappa

,Italy. His career as a DJ began in the summer of 1995. Early in his career he started as a resident DJ at J&J-Orbital(Fe),Italy. For the following 5 years Manuel performed as a special guest on some major events and clubs in the north east of Italy like: Fabula, Strauss Tour, Sonar, Under Construction, Energy Club, Ecu and Fuse.

At the end of 2000 Manuel decided to focus all his time and energy on what he loves to do best; producing his own music.He produced many tracks which were released under many different pseudonyms. When he first started producing he collaborated with his friend and collegue Roberto Fellini(Rishni) and after much success with him he decided to build his own studio called "Oldbridge" in Bassano del Grappa.

In December 2002, the artist name DJ Activator was born when Manuel sent 2 banging tracks to one of the Italy's hottest labels called "Activa Records"(Edinet Publishing Group). At that time he needed an appropriate artist pseudonym for that label and the inspiration was immediate, what could be better than Activator?

At the moment DJ Activator is the A&R for Edinet and he's planning all the releases of these labels:Activa, Explosive, Kattiva, Fuck off, Akustika, Dsl. Since the beginning of his production career he created a lot of famous aliases like: Outlaw, Prozact, Megaphone, Ultrasonic, Spy-Kore, Overdrive, Knockout, T-78, Manuel Es and of course Activator.

He was one of the originators from Italy who contributed making hardstyle famous in the world, due to his massive productions and powerfull DJ sets played in several big clubs around the globe such as Matrixx

Nowadays, DJ Activator is really satisfied with his job, but is still working hard everyday to make himself better and better to keep his sound underground and original as possible but mainstream at the same time. Overall his main purpose is to be loved by fans for his own music and spread it all around the world!

In 2009 he released his first album, a double cd called "Authentic style" which contains 18 new tracks and 18 classics. En Fire en We are the Bass en Fuck with the beats en QT13 enz. enz.

Super gedraaid in Zak van 't weekend! You said Fothermucker instead of Motherfucker! YES I DID!

we call him activator

still in love with this dj!

en ja hoor we call him is uit!!

Heey, thx for you help!! I hope to see my jacket soon and you also of course Big

Zijn feestje in The Sand was gruwelijk

you need some activator

who's that making that fucking noise

waited for so long

Uitspraak van Marscha VS op maandag 14 mei 2012 om 14:59:
Nice to see that in 3 weeks you are in Bloemendaal San Quentin festival

wow what a set! so many great and unknown tracks! i will definately not miss you @ defqon! (even though san quentin was probably the better party