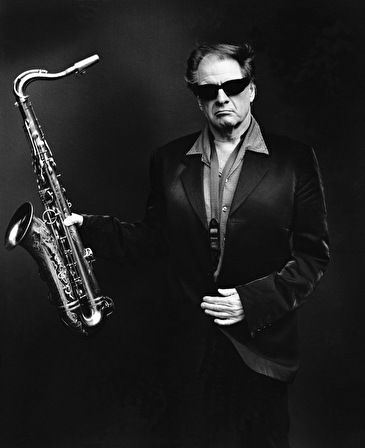 1940 - 1968
Growing up in Amsterdam West, Hans Dulfer (Amsterdam, May 28, 1940) as a teenager became interested in jazz music. He taught himself to play saxophone and plays since 1957 in the big band of Theo Deken. In 1958 he joins the Clous van Mechelen Combo, in 1961 he was a member of the Metropolitain Quintet. In the mid sixties he plays with Willem Breuker and is a member of the Big Ballad Boogie Blues Beat Bounce Band. Dulfer plays also freejazz with Peter Snoei. He has since then become one of the most prominent figures of the Dutch jazz scene.

1968 - 1972
From 1968 to 1969 Dulfer was leading the band Heavy Soul Inc. with Willem van Manen (trombone), Maarten van Regteren Altena (bass) and Han Bennink (drums). He started in September 1968 with the series Jazz at Paradiso. In 1969 Dulfer wins the Wessel Ilcken Prize. Dulfers interest in pop music leads to collaboration with rock bands like Groep 1850 and Barrelhouse. Together with Jan Akkerman Dulfer records the album The Morning After The Third in 1970, followed by the solo records Candy Clouds and El Saxofon. He was accompanied on these records, among others, by Latin musicians from the group Ritmo Natural.

1982 - 1987
Dulfer focusses on playing electric freefunk with his new band Reflud (Dulfer vice versa) with a.o. Thijs Vermeulen on bass. Despite numerous line-up changes, the group achieves an excellent live reputation. In 1983 Dulfer plays at the North Sea Jazz Festival with Herman Brood and he is playing as a guest musician along with the avant-garde formations Kiem and Nine Tobs. In 1985 Dulfer works with Peter te Bos of the band Claw Boys Claw on a blues project. A large part of the band Sjako! forms his backing band for a while.

1989 - 1993
While daughter Candy becomes more famous with mainstream pop-jazz, Dulfer sr's becomes interested in speed- and thrashmetal. In 1990 he was appointed director of Paradiso (an important pop music concert hall in Amsterdam). He gives up on dis position already after a year because of internal disagreement. In 1990 Dulfer starts a new band: Tough Tenors. For VPRO national radio he subsequently presents jazz radio shows like 'Streetbeats', 'Hothouse' and 'In the Midnight Hour'. In 1992, together with the Surinam Music Ensemble led by Eddie Veldman Dulfer presents the Kid Dynamite Suite, a tribute to the legendary tenor saxophonist Kid Dynamite from Suriname. In 1993 he receives the North Sea Jazz Bird Award. Soon after this he decides to move in a different musical direction.

1994
Dulfer records a dance music album, titled 'Big Boy'. This album leads to the hit single 'Streetbeats' and Dulfer becomes 'world famous in Japan'. In response to the success in Japan Dulfer records especially for the Japanese market 'Hyperbeat'. With this recording he becames defenitively a star in Japan, since it is the best-selling instrumental album of the year. In Japan, he receives a Golden Disc Award.

1996
The music on the new album 'Dig!' is comparable with the music on the 1994 album Big Boy. With the single 'Dig!', taken from the album, also a video clip is produced. Also this album is a success in several European countries, but especially in Japan. Dulfer is on tour in the Far East for the second time. In Europe, among other festivals, he plays at the Danish festival Roskilde.

1998
The new album 'Skin Deep!' incorporates big-band and drum 'n bass influences. This album was also quiet successful. Dulfer continues to do radio shows for VPRO radio and still performs every Wednesday in jazz café Alto in Amsterdam with his jazz band. These performances show that Dulfer, despite the success, never forgets his roots. Dedicated to the Japanese music market, the compilation album 'The Greatest' is produced.

1999
Again, Dulfer is successfully on tour in Japan. A scheduled performance in China is cancelled due to sudden political tensions concerning the Kosovo crisis. Recordings of a concert at Club Quattro in Tokyo in 1998 appear on the live album CD 'Papa's Got A Brand New Sax'. A track of Dulfer is used as soundtrack of the Dutch film 'The Delivery'.

2001
Dulfer is an actor in two short Dutch TV movies that were broadcasted in june: 'The Sound Of Drumming' and 'I Do not Believe' (in which he plays the role of a corrupt manager). In July Dulfer is the final act on the North Sea Jazz Festival. Together with daughter Candy Dulfer records an album that appears on CD in Japan, early 2002.

2002
Dulfer gains Royal honour when he becomes ' Knight in the Order of the Dutch Lion'. In july and august, he performs at the JVC Madarao festival in Japan. This world tour also brings him in Vietnam (late september/ early october), the USA (mid-october) and China (late october). Dulfer/Dulfer, the first duo album by Hans and Candy Dulfer, appears on September 21 in Japan. A few weeks later the album is also released worldwide. Father and daughter do a few gigs in december in Japan's Blue Note Clubs.

2003
The album 'Scissors' is a result from the collaboration with dance producer handieMan Maurice. SENA (the Dutch organization that manages "neighboring rights" announces that Hans Dulfer is the most often played Dutch musician on foreign radio and television.

2004
Dulfer contributes to 'What A Difference A Day Makes', a musical project of UNICEF in which a large number of Dutch artists and actors sing songs from the so called 'American Songbook'. Of each sold CD € 6.50 goes to the UNICEF project. On this album Dulfer plays the song 'Old Folks' and plays with singer Gerard Joling. Dulfer and his band play on the afterparty in september, after the performance of the American saxophonist Pharoah Sanders in Zoetermeer. The band members are besides Dulfer, DJ Kikke (Ruben van Roon, the drummer of the Jazzmeteors), Eric Barkman (bass) and rapper MC Helder (John Helder)

2006
Dulfer is part of the program at Jazz à Carthage in Tunisia, taking place in Tunis from 12 to 22nd April. He plays there on April 19, along with trombone player Joseph Bowie (Defunkt), pianist Bas van Lier, bass player Erik Barkman and drummer Erik Kooger.

2008
Dulfer decides to do a 'self release'. The album 'Live In Breda' is not available on CD or vinyl, but only digital, as mp3 tracks on an USB-stick.

2013
During his performance at P60 in Amstelveen on February 15, Hans Dulfer receives from the hands of actor and friend Pierre Bokma and daughter Candy a platinum record for his album 'Big Boy' from 1994. Dulfer sold over 65,000 copies.

2015
Dulfer celebrated his 75th birtday on the 28th of may with a spectacular musical party in the Amsterdam pop music hall 'De Melkweg, Amsterdam. The whole year Dulfer is on his 'Route 75 Tour', with many performances, also in Japan along with daughter Candy.