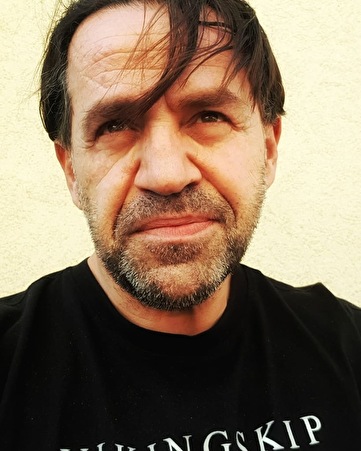 DJ Quicksilver aka Orhan Terzi was born in Turkey and is living in Germany. He is a DJ legend since years.

The name "DJ Quicksilver" was created at a DJ contest as the audience broke the column of quicksilver, which was installed as a success-o-meter, by applauding. Because of winning this competition, he became a requested Club-DJ in the scene. This also eased the opening of his own import-record shop, which offered him many ideas and was a meeting point of ravers and DJs.
→ lees meer
DJ Quicksilver aka Orhan Terzi was born in Turkey and is living in Germany. He is a DJ legend since years.

The name "DJ Quicksilver" was created at a DJ contest as the audience broke the column of quicksilver, which was installed as a success-o-meter, by applauding. Because of winning this competition, he became a requested Club-DJ in the scene. This also eased the opening of his own import-record shop, which offered him many ideas and was a meeting point of ravers and DJs.

With their first production "BINGO BONGO" the producers around DJ Quicksilver, Orhan Terzi and Tommaso De Donatis, had a Mega-Club-Hit immediately and remained in the German Sales Charts at a high position for weeks. The next hits that followed were "BOING" and, besides others, the Quicksilver/De Donatis remixes of Faithless - "INSOMNIA". Making number one positions in the DDC- and DMC-Charts, these remixes were even more successful than the original versions.

The next DJ Quicksilver single contained two great tracks: "I HAVE A DREAM" and "BELLISSIMA". This double A-side CD took number one position in the German Dance Charts for 12 weeks and became the absolute Mega-Seller with gold-status (over 650.000 copies sold, number four in the German Sales Charts, featured on over 50 hit collections). Having two video clips in the VIVA Heavy-Rotation can be called a sensation and Top Ten positions all over Europe (e.g. Spain, Austria, Sweden, Switzerland) made the appealing DJ an international star.

In the UK DJ Quicksilver got a chart-entry with "BELLISSIMA" on position no. 6 (peak position no. 3), more than 700.000 copies sold, first DJ act who performed three times with one track at the famous music show of the world "TOP OF THE POPS" - sensational Top Ten position for 8 weeks!

The next DJ Quicksilver smash hit was "FREE": For the first time ever a single went straight to the top of the DDC-Charts (German Dance Charts) - a number one chart-entry - and, of course, this was followed by an imposing no. 5 chart-entry in the German Sales Charts (gold-status). MTV and VIVA just took the new video clip, which was done in the landscapes of South Africa, into Heavy-Rotation. Finally "FREE" had a chart-entry on position no. 7 in the UK.

This collection of great tracks led to the release of what every DJ Quicksilver-fan was waiting for: the first album "QUICKSILVER", containing, besides all hits, further new tracks, that would not create a sensation the club-scene only. The debut album satisfied everyone, who expected the usual brilliant sound subtilizing and variety.

The single "PLANET LOVE" was a great success as well - it had a chart entry at position no. 13 in the UK. As wonted, the Terzi/De Donatis-Duo mixed their nose for actual trends with their well known overwhelming sound creations. With "ADAGIO" this single contained a second great track, which had the potential to become a hit itself.

After opening the new and bigger studio of Tommaso De Donatis in early 1998, he and Orhan Terzi went straight on working on the follow-up album of "QUICKSILVER". Driven by the success of "QUICKSILVER" and by their ambition do deliver high quality tracks, they once more released their vision of actual music, which will be lasting as well. This second album impresses with its skilful combination of classical elements with a perfect synthesis of Pop- and Dance-Music, which makes "ESCAPE 2 PLANET LOVE" an album for music lovers all around the world. While working on the new tracks, the Quicksilver-Duo made a sidestep for Mark van Dale. The DJ-Quicksilver Remix of "WATER VERVE", released in May 1998, reached a chart-peak at position no. 22, featuring a cameo appearance of DJ Quicksilver in the video-clip.

As usual, DJ Quicksilver got a lot of inspiration from his permanent appearances in clubs all over the planet, where he experiences and decisively creates new trends. The second album "ESCAPE 2 PLANET LOVE", released in November 1998, again features music, which contains a constant development to pop music, but still is best for use in clubs. Once again they could not decide which of the strong album-tracks should be the new single in Germany, therefore the roundtrip started with the Double-A-Side "ESCAPE TO PARADISE/TIMERIDER", which had a chart-entry at position no. 31 in the German sales charts.

At the same time another DJ Quicksilver-side-project entered the charts and instantly went to the top 20 of the German sales charts:
WATERGATE'S "MULL OF KINTYRE (THE BATTLE MIX)". Their next hit was "MAID OF ORLEANS", followed by the fantastic DJ Quicksilver Remix of "HEART OF ASIA" (in UK no. 3). This top hit made dance floors vibrate in direct competition to his single "COSMOPHOBIA".
"COSMOPHOBIA" contains excerpts from H. G. Wells well-known novel "War Of The Worlds". Orhan Terzi and Tommaso De Donatis succeed once again in producing club music at a high standard. In the sound transformation of this famous example both producers used recordings with the original voice of Richard Burton. The song reached top positions in all German dance charts and placed in German top 40.

The single "AMENO" of the successful team Terzi/De Donatis had quickly become a club-hit in traditional Quicksilver manner and reached a Top Ten position in all German dance charts. DJ Quicksilver used for this production a sample of the platinum single "AMENO" of the international successful group ERA. The DJ Quicksilver mystical Trance-Techno-Mix of "AMENO" entered straight the top 20 of the German sales charts and became also an international hit.

After his great success with "AMENO" DJ Quicksilver presented his single "BOOMBASTIC". In 1995 SHAGGY entered the charts all over the world with this megahit - well-known from the Levi's TV-spot - and had his final break-through in the United States, his adopted country.
"DJ QUICKSILVER meets SHAGGY" - the current most successful artist worldwide! A sensational combination, which let the crowd party and made not only the dancefloor move. With this production DJ Quicksilver proved his skills once again. The vinyl "BOOMBASTIC" was listed in all German dance charts at Top Ten positions. Its pushing beats and the concise refrain made sure that the single entered the charts directly on position no. 27. In the amusing "BOOMBASTIC" video "the real Mr. Lover" - Superstar SHAGGY - and DJ Quicksilver are playing an important part. Volker Hannwacker finished the costly shooting in Munich, Salzburg and London within three days.

In March 2002 DJ Quicksilver was honoured by an ECHO-nomination in the category "Best National Dance-Act" for his hit "Ameno".

Then he presented his project BASE UNIQUE. With the remake of the Elvis and Pet Shop Boys hit "Always On My Mind" a song was created, which is brilliant through its pushing basses and the impressive voice of the vocalist Diana Maria. Beside DJ Quicksilver's version, the track is also ennobled by the ACCESS Remix of the SAFRI DUO producers. The captivating video certainly was set directly on VIVA and MTV2 Rotation. "Always On My Mind" entered the German charts at position no. 44.

In November 2002 the track "NEW LIFE" war released. Refreshing! It was contrary to all current trends, no Coverversion or Remake out of the 80's, but an excellent creation by it's own.

With the released double-A-side "CLUBFILES ONE" DJ Quicksilver again came up to his fans expectations. The producer team Orhan Terzi and Tommaso de Donatis wrapped the Jean-Michel Jarre all-time-classic by an inimitable manner in a progressive and powerful driving sound. With file 1 - "EQUINOXE IV" they hit on an impressive manner the musical nerve of the time! Furthermore they created with file 2 - "RISING UP", that Clubburner with the original -" Eye Of The Tiger" theme (for the first time officially released by Survivor for a dance-version!!!), a second really breathtaking title.

"Rising Up" rocked, just as "Equinoxe IV" the clubs all over in Germany and Europe. "CLUBFILES ONE" arrived at speed of light at the top of almost all dancecharts in Germany and went on rotation on VIVA and MTV. Because nobody was able to decide again for one of the strong tracks as the new single, the musical excursion starts with the double-A-side "Equinoxe IV" / "Rising Up" into the chart-universe!

After 5 years of absence DJ QUICKSILVER strikes back with 2 explosive mind blasters for the clubs - following his last hit Clubfiles One. In co-operation with the producer legend Ramon Zenker (Fragma, STFU, Hardfloor, Bellini) he creates "CLUBFILES TWO" - a massive 2tracker: "PULSTAR" and "MARS ATTACK". The amazing rework of PULSTAR comes as a massive pumping, Swedish style tune with the delicious Pulstar melody from Vangelis. MARS ATTACK is a headbanging, progressive club track for the peak time and caused already a massive reaction by the crowd.