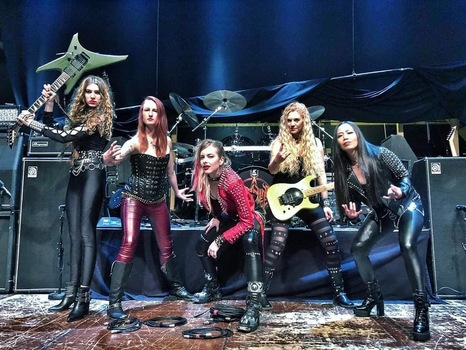 In 2015 Romana started to look for talented ladies for the new combo. Jeanine Grob (bass) a longtime friend, became the first official member. At a party on a festival Romana met Seraina Telli (singer) for the first time. It clicked right away betweens the two girls, on a musical and on a personal level. Seraina brought in many ideas and a lot of experience cause of her studies at the Music Academy and her band SURRILIUM. The guitarist and the singer became a great songwriting team right away!

Romana wrote her mate Schmier from DESTRUCTION / PANZER about her new project, he was interested in the new outfit and the ladies brought him onboard as a producer / consultant!

After an intensive search and different auditions, BURNING WITCHES found Lala Frischknecht the perfect drummer for the all chick metal band. Since summer 2015, the girls have been working hard on new material and in autumn 2015 they recorded the first three songs with VO Pulver at Little Creek Studio (PANZER / PRO PAIN / DESTRUCTION).

The search for the right band name was kind of easy, because if four crazy girls burn hard for Heavy Metal, they can only call themselves BURNING WITCHES.

The self-titled full length debut album "Burning Witches" was released in May 2017, which caught a lot of attention in the metal world.

Due to personal reasons, Alea unfortunately left the Band by the end of 2017 and got replaced by the young and very talented Sonia Nusselder from the Netherlands!

Burning Witches got signed by the mighty Nuclear Blast records and have released their second full length album "Hexenhammer" in 2018. Also the debut album was re-released via the label from Germany.

On June 2019, Seraina Telli decided to leave the Band to focus on her own career. Due to the Swiss - Dutch connection, the girls found the amazing Laura from the Netherlands pretty quick and she was a great match right away. Laura's highly melodic but also aggressive metal voice fits perfectly into the Burning Witches music & concept!

Since then these ladies have been busy playing all around Europe and even Russia, they also rocked the big open air festivals like Wacken Open Air, Summer Breeze, Rock Harz and Sweden Rock.

The first single with Laura is called "Wings of Steel" and the reactions from the devoted fans were really enthusiastic. At this moment the girls are completing the recording of the 3rd album, that will introduce enchantress Laura as a new vocalist. The album will be released in March 2020 via Nuclear Blast records.