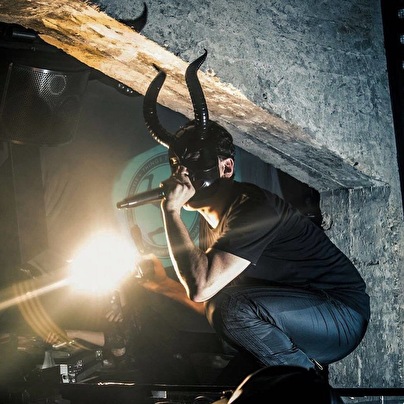 Recording since 1989 he and has released over 80 12" singles and 5 full length albums. He had a Number 1 hit on the German Dance Charts (DDC) with the song "One Night in NYC" and his album "Manic Panic" went to Number 1 on the German Alternative Chart (DAC). The scope of his music catalog is huge and he has recorded for every major label (Universal, Sony, Warner, etc...) and all the best known techno labels (Tresor, Gigolo, Industrial Strength, Neue Heimat, Credo, etc..). The Horrorist has worked with the biggest names in techno including Chris Liebing, Ben Sims, The Hacker, Arnaud Rebotini, Marc Acardipane, Black Asteriod, John Selway, Frankie Bones, Ricardo Villalobos, Haujobb, Alex Bau, Radical G, Frank Kvitta, DJ Rush and more have all remixed and produced with The Horrorist. His subsequent albums "Attack Decay" (2007), "Joyless Pleasure" (2011) and "Fire Funmania" (2013) have been met rave reviews! He is currently working on his 6th studio album called "Separate Dimension" due late 2018 on the Berlin based Aufnahme und Wiedergabe. The first single from Separate Dimension is called Programmed and has been remixed by Silent Servant, Thomas P. Heckmann and Lado.

Although dance orientated most of his songs have vocals and usually progress to a crescendo at or near the end. Music journalist of the Village Voice and several books on electronic music, Simon Reynolds called Oliver Chesler "My favorite contemporary American singer-songwriter.". A wide range of influences from Depeche Mode to Leonard Cohen to DAF factor into Chesler's song writing manifesting into a completely original sound. His ability to make song structured music work on the dance floor is a big key to his success. His vocal technique is quite original and unique. He also refuses not to stick in one genre so on any given record expect styles from indie new wave, electro, EBM, techno, to synthpunk.

Oliver Chesler also ran the famous Things to Come Records from 1995-2007. The label will start up again in 2018 with the team behind Killikill and Flexiwave (Metabanana Airforce Distribution). "

Things To Come does exactly what the name suggests, and that gives the future something to look forward for....." - Frankie Bones

The Horrorist is a sensational live act. A mixture of industrial attitude and punk style with synth-techno music. Playing a set that goes from minimal or new wave all the way to hardcore and everything in between, there is something for everyone. But the biggest thing about the Horrorist's sets is the interactivity that comes with having a live performer that a crowd is capable of understanding. The show is comprised of Chesler's in your face vocals, video projection and live drum machine and synth. The Horrorist performs regularly around the world and has played in every major nightclub and for most major event organizations. He's wowed crowds from LA to Malta. Definitely something else, check it out if at all possible!!

The Horrorist is one of those unique artists that only come around once in a while. He is a big influence on the electronic music scene and will be for years to come. We Are All Alive

One night in NYC is geniaal

We are all live hardcore will never die!!

en she was just 15years old

THE VOICE OF THE BUTCHER, NORDCORE GERMANY

Flesh is the fever

Geweldige dj/producer Flesh is the Fever!

ahh, the memories, prachtig was dit